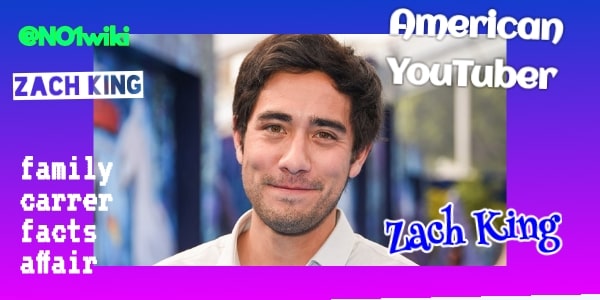 Zach King is an american internet personality, filmmaker, and illusionist who famous for his magic video which he upload on youtube and later become viral on Tik Tok, Instagram, and Facebook.

He upload lots of magic videos or “magic vines”, which videos are just six-second long and edited to look as if he is doing magic.

He calls his videos “digital sleight of hand” and he began posting videos on YouTube in 2008 and in 2013 he start posting those videos on other social media platform.

So, when he start this on Tik Tok he become viral and known as a famous social media star or internet personality.

Now, if you want to know more about him then you are in the right place just stick with this article until the end.

Zach was born on 4th February 1990 in Portland, Oregon, US. He was born in a higher middle class family.

He is very passionate about making films or videography, he make his first film when he was 7, and due to his passion he decide to start his career as a filmmaking.

When he was 14 he purchased all the equipment and work very hard in filmmaking and pursue this as a education and career sector and today he become viral due to the videos which he edit and upload.

The Career of Zach King.

King start his career as editor, he start his website, FinalCutKing.com in 2008, and he offer some training and tips about video and photo editing using the editing softwares on his website.

At the same time, he start his youtube channel and start gicing visual effects tutorial using the software.

When he gain some audience on his youtube channel then he send them on his website and start selling training seminars and use this money to pay for his college.

He participate as a contestant on an episode of Viral Video Showdown that aired on Syfy in 2012.

After lots of participation, in december 2019, King baffled the internet with his video in which he show that he is flying on a broomstick.

This video become viral in different social media platforms and watched over 2.1 billion times on Tik Tok in 4 days and this viral video change his life.

After that he participate in lots of other shows and he won the Hewlett-Packard commercial contest in 2010, and got a trip to the red carpet at London Film Festival, and this make him more viral.

In 2015, King and his wife, Rachel competed in the 28th season of American reality game show The Amazing Race.

Some Unknown facts about Zach King.

Zach King is an american social media star famous for his videos which become viral.

He upload lots of such magic vines on his different social media account.

King also won a ticket in which he get chance to walk on a red carpet at London Film  Festival.