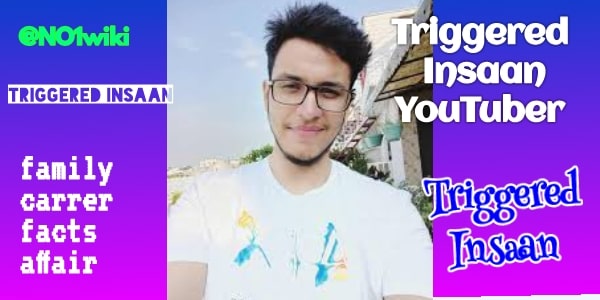 Triggered Insaan is the name of the youtube channel which is run by a Delhi-based 25 years old boy, who is famous for making roasting, commentaries, and reacting videos.

He is so popular and you can understand this because he has 6.5 million subscribers on his YouTube channel and this is one of the most popular YouTube channels in India.

If you also want to know about him and his YouTube career then you are in the right place just stick with this article until the end.

The real name behind this channel is Nischay Malhan on 14th November 1995 in New Delhi, India and he is very famous for his youtube channel in which he uploads videos related to roasting, commentaries, and reactions.

He was born in a higher middle-class family and he is a very well student in the study because he completed his engineering in ECE from Indian Institute of Technology (IITD).

But, now he is a full-time Youtuber and earning a very well amount of money from his channel and regularly upload videos of his choice.

The Career of Triggered Insaan.

We talk about the career of Nischay Malhan, who is the owner of the famous Indian youtube channel Triggered Insaan.

But before the popularity of this channel, he starts his career as an engineering student at IIT Delhi. One fine day, Nischay bought a gaming laptop from his father and that’s when he started his youtube career.

Initially, he started his channel by uploading gaming videos and name his channel “It’s Nischay” but later he changed his content and upload commentaries and many other things and rename his channel to “Triggered Insaan”.

He uploads his first video on 25th June 2017 and in the next 365 days he able to gain more than 100k subscribers. In February 2019, his youtube channel crossed the milestone of 1 million subscribers, and then he never looks back.

Some Unknown facts about Triggered Insaan.

The real name behind Triggered Insaan is Nischay Malhan.

He wants to be an engineer and he is a very bright student in the study and complete his engineering degree from IIT Delhi.

He starts his youtube channel to upload PUBG gameplay but later he uploads videos in a different category also.