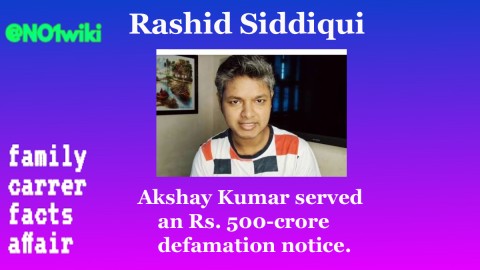 Rashid Siddiqui is an Indian Youtuber who alleged that he posted fake news about Bollywood star Akshay Kumar regarding the Sushant Singh Rajput’s mystery suicide case.

Rashid Siddiqui was born in 1995, in Bihar, India.

He is the owner of YouTube channel named, ‘FF News’. This channel has alleged that he posts fake news.

His YouTube channel has an approx 3 Lakhs subscribers and earns very well through that YouTube channel but he gets the spotlight of fame when allowed superstar Akshay Kumar served him an Rs.500 crore defamation notice.

The Career of Rashid Siddiqui.

Like some other people, he also works very hard to start a YouTube channel, first, he did not get any subscriber and views on his news YouTube channel.

As we all know that anyone can earn money from YouTube but he/she must need a good amount of subscribers and views on their channel videos.

So, to increase his views and subscribers he applies his idea of fake news.

To earn a good amount of money from YouTube, he uploads videos with fake news with no base and sense.

The saddest point is he gets a good amount of views and subscribers when he starts uploading fake news without any proof.

Now, Akshay Kumar was very hurt by his news on his youtube channel “FF News”, in that video he talks about Akshay Kumar that he help Rhea Chakrabortty and many more about SSR’s suicide case.

After hearing this fake news Akshay Kumar done what that he wants, he makes him popular as he wants not only on social media but also on all news channels.

As per report by Mid-Day, Siddiqui alleged that in his YouTube channel he said that, Akshay helped accused Rhea Chakraborty escape to Canada and also had secret talk with Uddhav and Asditiya about SSR’s death.

He said in his youtube channel video that actor Akshay Kumar was unhappy with Sushant bagging MS Dhoni – The Untold Story.

Some Unknown Facts about Rashid Siddiqui.

He is the founder of the FF News YouTube channel which full name is Filmy Friday Nnews. In this channel, he cover only Bollywood related news.

Within a few months, the number of subscribers on Siddiqui’s YouTube channel increased from 1 Lakhs to more than 3.70 lakhs.

This YouTuber has earned a very good amount of money in just four months.