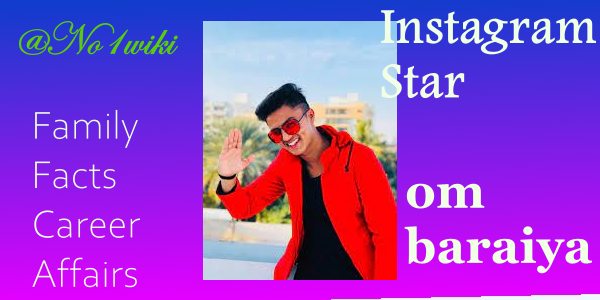 Om Baraiya is a popular tik tok star and also a popular social media influencer. He has a very cute dimple smile. He is very handsome and mainly popular among girls. He is mainly popular for uploading dance videos and lip-sync videos.

He was born on 7th April 2002 in Morbi, Gujrat, India. He is 19 years old now, and in such a short period, he became a very popular celebrity in Gujarat. He loves uploading his videos on different social media platforms like Tiktok, YouTube, Instagram, etc.

His father’s name is Arvind Ganesh Bhartiya, and in his family, he has four lovely and sweet family members. He has his father, mother, and younger brother. He has a very supportive family.

The Career of Om Baraiya

Om Baraiya is very good looking and has an amazing personality. He is always sharing her photos and videos on Instagram. He is very popular on Instagram and he has more than 116 K followers on Instagram.

He also uploads his videos on social media platforms like on tik tok he has more than 6 million followers and 198 million likes on his tik tok account. Now, he is completely focusing on his acting and modelling career.

He had also worked on Gujarati song albums. His first song was  “Ghumariyu” with Twinkle Patel which got more than 17 Million views and is still counting on YouTube.  Another famous video on YouTube is  “Hal Khavadavu Sandwith” with Dev Bhatt also popular on Youtube.

Some unknown facts about Om Bhariya