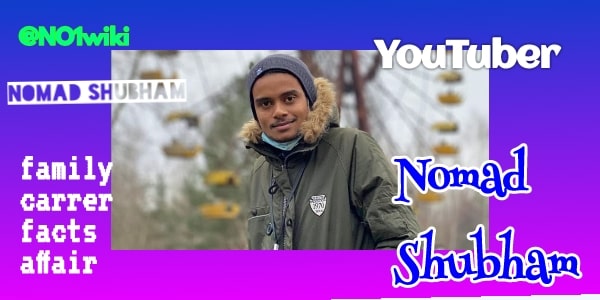 If you like traveling and want to make a career in this field, this post is for you, and you can become inspired by this man who makes his career in traveling at a very young age.

Nomad Shubham is a traveler, and he runs a youtube channel and website where he tells about some exciting knowledge about traveling and travels more than 20 countries.

If you also want to know more about this guy, you are in the right place, so stick with this article until the end.

Shubham was born on 2nd December 2002 in a small village near Bhagalpur of Bihar.

He belongs to a significantly lower-middle-class family where his father is a teacher and only source of income, and his family wants to see him as an engineer.

But he is very passionate about traveling, and that’s why he dropped his IIT preparation in the middle and started his journey; and in the past two years, he traveled to more than 40 countries and made a world record.

He invests his youtube and website earnings in traveling and makes lots more money through his traveling videos.

The career of Nomad Shubham

Nomad Shubham is the name of his youtube channel, and he starts his career as a traveler when he was inspired by one youtube video in which he learns how to travel around the world in free.

In his one video, he says that it is impossible to travel free, but you can travel significantly less; after inspired by that video, he starts his journey to Ladakh and forms his youtube channel.

He is very passionate about traveling, and you can say that because he travels more than 10,00000 kilometers in the past two years, including two continents and 40 countries.

He visited the world’s coldest place, which is Oymyakon (-72 degree) in Russia, and in that journey, he was able to make a world record for the most extended travel through hitchhiking & public transport.

The exciting thing is he does not want to make a world record, and he wants to travel, and automatically one world record comes in his name.

In one video on his youtube channel, he said that many people think that to travel this world, they need lakhs of money, but he can travel for more than ten months in 1 lakhs rupees, and that 1 lakhs comes from 1 million subscribers of his youtube channel.

Some Unknown facts about Nomad Shubham

Nomad Shubham is a youtube channel run by an Indian boy Subham, who loves to travel and make money from his traveling videos on youtube.

Shubham is inspired by a video title, “How to travel the world without money.”

He is from Bihar and follows his passion at a very young age.