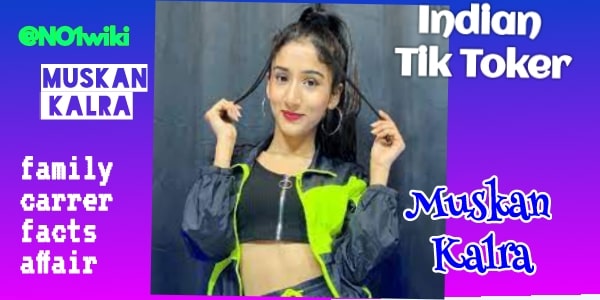 Muskan Kalra is an Indian youtuber and famous Tik Tok star. She has a huge fan following because of her talent in dance. She is mainly famous for uploading dance videos on YouTube as well as Tik Tok. Her first dance video song on YouTube was Aashiq Banaya Aapne, and that video was uploaded in 2017 on her YouTube channel.

If you want to know more about her then read this article and till the end. In this page you will get to know how talented she is and why she is such a popular celebrity. In this page we will discuss her professional as well as personal life too.

In such a small age she became a popular and famous Tik Tok star. During Her childhood she was very much interested in dance and music. She has a supportive family who always supported her to make her career in her own field. She joined dance classes at a very young age.

She started uploading videos on YouTube in 2017. Her first video was released in December 2017 and the song was Aashiq Banaya aapne.

Muskan has 1.16 Million subscribers on Youtube. She has a huge fan following on youtube because of her amazing dance moves.

She is young, talented, and very passionate about her dancing. Muskan Kalra’s new dance videos are now very popular on YouTube. She came in lime-lite when her video “Tu Cheese Badi hai Mast Mast ” went viral on YouTube in the year 2017.

Some interesting facts about Muskan Kalra