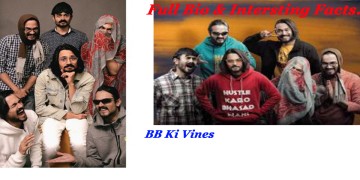 If you are in your teenage and using YouTube to entertain yourself, then there is a very high chance that you must know what Bhuvan Bam profession.

But if you are new and hear this famous name from word of mouth, then just stick to this article till end.

Here you get full information like – Bhuvan Bam Wiki, Girlfriend, Net Worth, Awards & many more.

Bhuvan Bam is an Indian comedian and YouTube sensation personality.

He was born on 21st January 1994 in Delhi, India. He famous for his viral videos on his YouTube channel “BB Ki Vines” .

Bhuvan Bam is also famous for his singing and song writing.

He writes his own songs and sing them with full entertaining video which upload on YouTube channel BB Ki Vines.

Bhuvan manage sponsers, Video creation and Marchendies through that company.

If you are using chatbox of any social media then you must get a sticker of BB Ki Vines and there are lots of merchandise also available in the market on the name of Bhuvan Bam.

What is BB Ki Vines

BB Ki Vines is the name of famous YouTube runs by Bhuvan Bam.

BB Ki vines have a 2 to 8 minutes long videos on the life of urban teenager name Bhuvan, and his conversations with his friends and family members.

In that video, Bhuvan himself played all the characters like – “Banchoddas, Sameer Fuddi, Titu Mama, Mr Hola, and Babloo Ji.“

The videos of this channel are filmed by using the front camera on a phone by Bhuvan himself. He originally uploads his videos on Facebook in his early days and after a good response of the public, he moved to YouTube.

Music Videos and Other Works of Bhuvan Bam.

His first video released through “The Viral Fever”, now he own produce his music videos.

That video became so hit and one of the viral videos of Bhuvan, which encorage him to upload more music videos.

The most common and interesting thing is that he is the singer in all these songs and he himself write all the songs.

Bhuvan also appeared in a short film, “Plus Minus”, along with Divya Dutta which make a record in Indian YouTube that this film cross 1 million likes in 24 hr.

Bhuvan Bam short film “Plus Minus”, which earned him a Filmfare award, for Best Short Film.

He recently uploads one another music video name “Heer Ranza”, which also became trending video on YouTube for some days.

There are lots of people who regularly search on internet that who is the gf of Bhuvan Bam.

If you are one of them then you are on a right place.

As we all know Bhuvan is not only a Youtuber but also a director of BB Ki Vines Private Limited and Designated partner at AMB Youthiapa LLP, this is the company behind his merchandise.

His million of fans wants Bhuvan to answer there question that who is the dream girl of Bhuvan Bam.

Then, we have an answer for you that, Apart from his acting and singing skills, he started dabbling in the fashion circuit and if you are following him on insta then you must note that.

So, according to the latest report of his fashion career it is revealed that the beautiful girl is Arpita Bhattacharya.

However, Bhuvan Bam yet to make his relationship official with Arpita Bhattacharya.

But if you believed in media reports then both Bhuvan Bam and Arpita Bhattacharya have been dating each other for quite some time.

Check The Popularity of Bhuvan Bam.