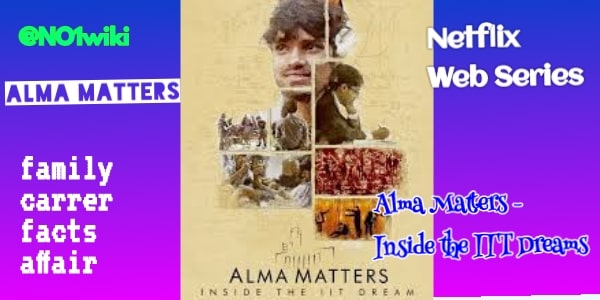 Alma matters: inside the IIT dreams is a web series released on 14 May 2021. It is full of college life stories.

Which completely shows how the engineering students life is?

This series is in the Hindi language and is launched on the OTT platform Netflix.

The whole shooting of this web series is done in India, and the series is too long and hence is decided into three parts. Each part is 50 minutes long.

Trailer of Alma Matters: Inside the IIT dreams.

The official trailer of Alma matters: inside the IIT dreams was released on 24 April 2021.

Only in three weeks, the trailer crossed 24 million views. And also got 85k likes.

The trailer dictates the story of IITians produced in Kharagpur. This series is moving around generally the mail students.

An institution with decades of legacy, millions of aspiring students, one common dream.

The series shows the Indian version of the American Dream that involves clearing the world’s toughest public exam for guaranteed lifelong success.

Clearly, the movie will show life is not an exam. There is an entrance exam in life and then the real test. It’s a hustle, one that nobody is trained for.

In the trailer, you will get to see a true and funny line. That a boy says:” Itna bada institution or aisa get. “

So, at the end of the first episode of Alma Matters: Inside the IIT Dream, we know that the documentary is trying to show how commercialized IIT has become, and it was not the same as it was 69 years back.

Below you get small list of cast and crew who work very hard to make the film successful.

Trailer of Alma matters: inside the IIT