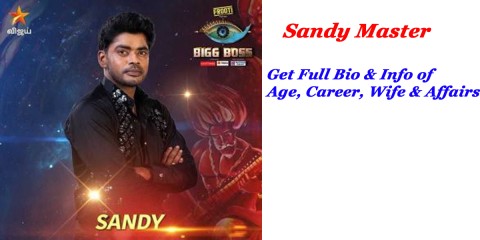 If you are interested in Tollywood films or South Indian Films due to their music and dance and many other technical things.

Then you also know who is behind the scene of Tollywood, if not let me know you – He is known as Sandy Master.

As Sandy master is always behind the scene of south cinema therefore he not get his actual fame in this industry.

But, now everybody knows about Sandy Master due to his performance in Bigg Boss Tamil Season 3.

If you are searching for information regarding participants of Bigg Boss Tamil then you are in a right place.

Here, you get Sandy Master’s Age, Girlfriend, Wife, Family members and many more. So, just stick to this article until the end.

Sandy Master is one of the famous stars in Tollywood Movies.

Sandy is a choreographer in south Indian movies. He choreographs for films and many T.V shows.

Sandy loves dancing since childhood. He participates in all the events in school and college. Later his participation gave him the confidence to take part in big events and this work as fule to his career.

In 2005, Sandy got his first chance as choregrapher in the season 1 of dance reality TV show “Maanada Mayilada”.

The team which choreographed by him one that reality show, and this gives an opportunity to Sandy to get more choreography jobs.

The judge of the show, “Lata Master” also helped him a lot to be a part of various dance reality shows as a choreographer.