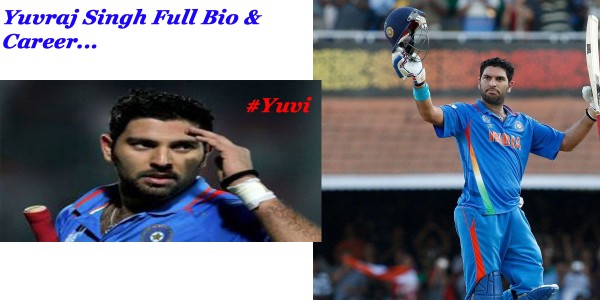 You won’t find a better hitter than him. He is the cleanest hitter of the cricket ball of all time.

I think now you understand who I am talking about.

I am talking about “Yuvi” i.e.; Yuvraj Singh, a former Indian all-rounder cricketer.

Every cricket fan deep down known that no one can replace him.

He represents team Indian till his teenage and he gives some unforgettable moments in which India can proud.

Without wasting much of a time just make yourself ready and stick to this article till end.

Here you get to know about Yuvraj singh wife, father, retirement, net worth and many more.

Yuvraj Singh is a former Indian cricketer who play in all imporatnt ICC champoins trophy in all forms of the game.

He is an all-rounder cricketer of team India. He is a left-handed batsman who came on the pitch in the middle order and slow-left-arm orthodox bowler.

Yuvraj Singh became a star of the Indian cricket team after his performance at the Under-19 level. After that, he also shows his aura in the T-20 World Cup 2007.

His name comes under one of the very rare cricketers who score six sixes in international cricket.

How’s the Career of Yuvraj Singh

Yuvi is well for his inregular events, through which he escape India from claws of lost.

Yuvraj Singh proved himself all the time because when all chips were down, he rescued the team India more often than not.

He won Under-14 Roller Skating Championship, but his father threw away the medal and told him to forget skating and concentrate on cricket.

Yuvraj Singh began his career with Punjab team Under-16 at the age of 13 years and his first match was against Jammu and Kashmir.

Yuvraj was promoted to Punjab Under-19 and he scores 137 not out against Himachal Pradesh which makes him star of cricket and everyone starts waiting for this star to play in international cricket.

After his Under-19 match against Bihar, which trailer you may see in the biopic movie of Dhoni i.e.; “M.S Dhoni – The Untold Story”.

That match was Yuvraj’s first best break-out performance which everyone sees in Under-19 Cooch Behar Trophy Final of 1999 against Bihar at Jamshedpur, were was Bihar all out at the score of 357 and Yuvraj made 358 runs himself only.

All cricket selectors knew that this boy has something special to offer and without wasting time he got a chance to play for international cricket from India team.

He proved everyone right by scoring a match-winning score of 84 runs against all mighty Australian attack bowlers.

He score a match-winning 30 balls 70 runs against the Australians in the semifinal and his six sixes against the England side make him an unforgettable star of cricket.

Yuvraj Singh again became an instrument in the 2011 World Cup that India won. He also won 4 men of the match award along with the man of the tournament in the big event.

Right after the world cup, one scoking news came over that Yuvi is suffering with cancer.

The whole nation prayed for him and he defeated cancer and came back strongly.

Yuvraj Singh try to make a strong start from 2017 season and try to made the best possible comeback.

However, he couldn’t hold on to his place for long time and dropped the cricket.

He give a very impressive IPL 2019, but he didn’t got selected for India international match again.

On 10th June 2019, while announcing his retirement from the international cricket, Yuvraj Singh attracts one controversy towards him by making a comment on BCCI’s Yo-Yo Test.

He said that – “I have a lot to tell about Yo-Yo Test but I will not say anything now to create any controversy as Team India in World Cup”.

After this statement, Yuvraj Singh came in lots of media and everyone wants to know what he wants to say that day about Yo-Yo Test of BCCI.

Relationship and Affairs of Yuvraj Singh.

Net Worth of Yuvraj Singh through Cricket is $ 35 Million Dollar

Check the Popularity of Yuvraj Singh