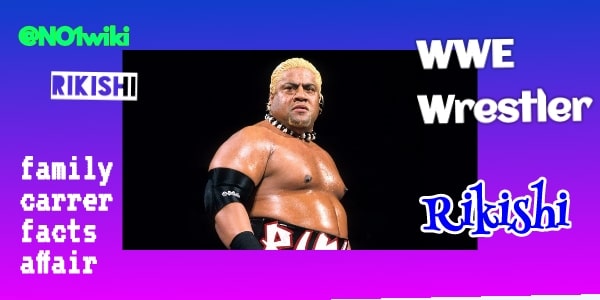 Rikishi is the nickname of Solofa F. Fatu Jr., and he is an American professional wrestler mainly known for his performance in WWE.

Rikishi is famous for his size and beast style of fighting. His ass move is one of the unique and unforgettable by all WWE fans.

If you are a fan of WWE and want to know more about this beast guy of WWE, then you are in the right place and stick with this article until the end.

Solofa F. Fatu Jr. was born on October 11, 1965. He was born in San Francisco, California, US. He is an American professional wrestler, who is very well known under the ring names Rikishi and Fatu with World Wrestling Entertainment (WWE),

He is a member of the Anoa’i family. He was inducted into the WWE Hall of Fame by his sons, wrestlers Jey and Jimmy Uso, in 2015.

This WWE wrestling is their family business, and they are the whole family that belongs to WWE and wrestling.

The Career of Rikishi.

Rikishi began his wrestling career in 1985.

He often used to be in a team with the territory’s top faces. Nishiki also has so many stage names.

Given an award by his loving audience, some of the names are present over here, like Headshrinker, Fatu, Prince, Rikishi, and The Sultan.

The Headshrinkers helped Yokozuna to win a casket match against The Undertaker at the 1994 Royal Rumble.

Fatu and his wife Talisa Fuavai-Fatu are a perfect couple made for each other.

Rikishi is a playable DLC character in the Attitude Era-themed video game WWE ’13 or 2K13.

The game became very popular and loved by not only kids but also by the fans of WWE.

Rikishi is a very popular and loving wrestler who got so much love from the audience. Not only a great wrestler, but also he is a great man.

Some Unknown facts about Rikishi

Rikishi is a famous WWE wrestler and is mainly known for his big body and beast fighting style.

His children Jimy & Jey Uso are currently wrestling in WWE and won lots of recognizations and awards as a tag team partner.

WWE wrestling is just like a family business for Rikishi.