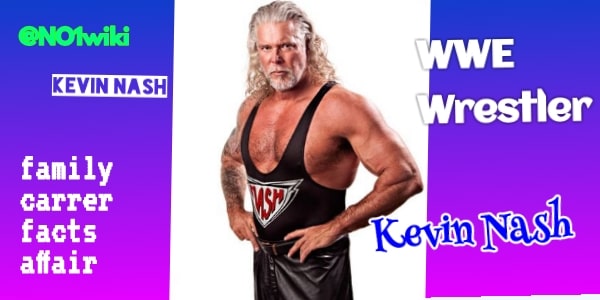 Kevin Nash is an American wrestler famous for his WWE fights and some of the best Hollywood films.

If you watch this man in WWE, basketball match, television films, and shows and want to know more, then you are in the right place. Just stick with this article until the end.

Kevin was born on 9th July 1959 in Detroit, Michigan, United States, in a high-class family.

As his family background is related to wrestling, he is also very passionate about wrestling. He became an unforgettable part of WWE, WCW, WWF, and many more wrestling companies in his career.

He retired from wrestling, but under his legend contract, he is known for his tenures of World Championship Wrestling (WCW) and Total Nonstop Action Wrestling (TNA), where he performed under his real name – Kevin Scott Nash.

He is also famous due to some of his ring names like – Diesel, Kevin Nash, Master Blaster Steel, Oz, Vinnie Vegas.

Kevin wins a total of 21 world championships in his wrestling career, including six-time world champion in WCW and WWF and 12 times tag team champion.

Kevin Nash is the first wrestler to defeat Goldberg, and in this process, he end Goldberg strike at 173-0, in 1998.

The Career of Kevin Nash

Kevin Nash start his career as a WCW wrestler, when he left his basket ball team.

He start one half of the tag team known as The Master Blasters, and made his debut as a single match from Clash of the Champions XII on September 5, 1990.

The reconstituted Master Blaster continued their undefeated streak in OctoberMeanwhile. Meanwhile, Nash would have his first singles match on September 28 by defeating Tom Zenk.

After that he start fighting single matches and he won lots of iconic matches and gave some unforgettable moments like joining The Kliq, ending the Goldberg streak and many more.

He join a team whose name is The Kliq, which include Shawn Michaels, Triple H, Scott Hall, and X-Pac.

Nash was inducted individually into the WWE Hall of Fame class of 2015, and In 5 Jan 2020, he take retirement from wrestling.

Some Unknown facts about Kevin Nash

Kevin well known as the first wrestler to beat Goldberg and end his streak at 173.

Kevin is one of the best player of WWE, WCW and also fight for TNA.

He is the founder of three-member team nWo.

He won this match and inducted for Hall of Fame in 2015.