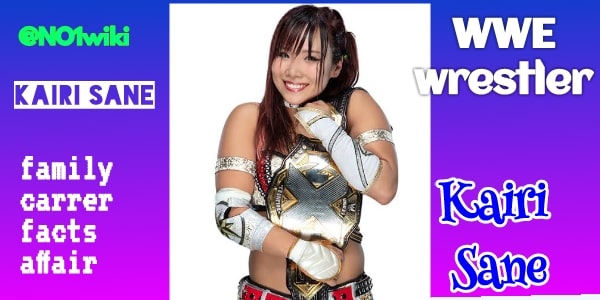 Kairi Sane is a Japanese professional wrestler and actress famous for her performance in WWE.

She is a famous wrestler whose ring name is Kairi Sane and she starts her career in Japanese professional wrestling, but later start fighting for WWE.

She gets an acting opportunity in some English and Japanese films which makes her more popular and if you also want to know about this beautiful wrestler then stick with this article until the end.

Kairi was born on 23rd September 1988 in Hikari, Yamaguchi, Japan with the name of Kaori Housako in a middle-class family and she is very good at sports since her childhood.

After completing her graduation from Hosei University she starts her career in acting and works in lots of Japanese theaters and one time she gets an invitation from the general manager of the World Wonder Ring Stardom.

When she sees the event of WWRS then she fell in love with this event where acting and wrestling both are important aspects and combining and then she works very hard to become a wrestler.

First, she wrestles for World Wonder Ring Stardom, and later she gets the opportunity to fight for lots of fighting organizations.

Now, she is a full-time wrestler in WWE NXT.

The Career of Kairi Sane

She starts her career as an actress but when she gets the opportunity to wrestle in World Wonder Ring Stardom then she did not miss that chance and fights very well.

Later she gets the opportunity to fight in WWE NXT with the name of Kairi Sane and she signs the deal with WWE in 2017 and she captured the NXT Women’s Championship in 2018 and subsequently won NXT Year-End Awards for Female Competitor of the Year.

She also becomes a one-time and the longest-reigning WWE Women’s Tag Team Champion along with Asuka.

Now, she has returned to Japan to join her husband in 2019, and since then she is working as a WWE ambassador in Japan and trainer in her native country.

Some Unknown Points of Kairi Sane

She starts her career as a Japanese actress and suddenly fell in love with wrestling.

She has lots of ring names like – Doku, Kairi Hojo, Kairian 3.0, Kairi Sane, Pirates Kaiser. But she mainly knows by the name of Kairi Sane, because of WWE.

She is the longest reigning WWE Women’s Tag Team Champion along with Asuka.

Now she works as an ambassador and trainer in her native country.