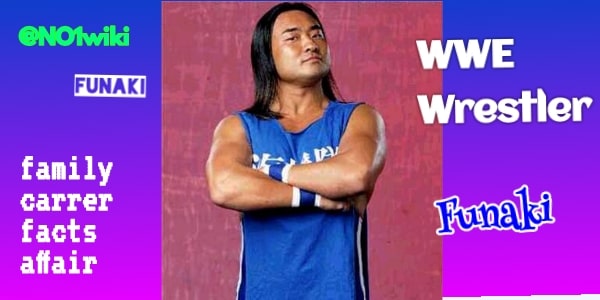 Funaki is the nickname name of Shoichi Funaki, and he is famous as a Japanese professional wrestler and color commentator favorite for his performance in WWE.

If you also watch his match in your childhood and want to know more about him and his current situation, then you are in the right place; just stick with this article until the end.

Funaki was born on 24th August 1968 in Tokyo, Japan. He is one of the best wrestlers of his time.

He is a one-time cruiserweight champion and one-time Hardcore champion in WWE.

He is currently worked for WWE as a Japanese-language play-by-play commentator.

He was born in a middle-class family, but when he gets appreciation for his shoot-style wrestling style, he gets lots of name and fame.

When WWE attracted to his performance and signed him for World Wrestling Federation, he got lots of appreciation and earned money and fame in huge amounts.

The Career of Funaki WWE

Funaki starts his career as a Japanese wrestler, his wrestling style is shoot style, and he fights in Yoshiaki Fujjwara’s Pro Wrestling and later moves to its successor, Battlarts.

Later he found another fighting style, and that style is Lucha libre style which is more to his liking, and he moved to Michinoku Pro Wrestling with this new style.

He joined with Taka Michinoku, Dick Togo, and some other famous Japanese wrestlers of that time and raised his limelight of popularity among them.

But his career changed direction when he signed for World Wrestling Federation/ Entertainment from 1998 to 2001.

In this new Contract, He became SmackDown’s No.1 Announcer, and he became one of the big names in SmackDown after the Survivor Series match.

After that, he again got a good Contract, which is 2004-2005, and in this Contract, he became Cruiserweight Champion and got a good response from his fans.

He currently takes retirement from Wrestling and works as a commentator for WWE in the Japanese language.

Some Unknown Facts About Funaki WWE

Funaki WWE is a big name, and he starts his career as a small wrestler in Japan; later, he signed for WWE and won Cruiserweight and Hardcore  Champion, which change his career.

He works for many wrestling companies, but WWE is one of the big names in all.

Funaki opened his training facility in San Antonio, Texas, in June 2012 with the name of Funaki Dojo.

He is one of the best commentators who can steal the heart of his fan from his commentary.