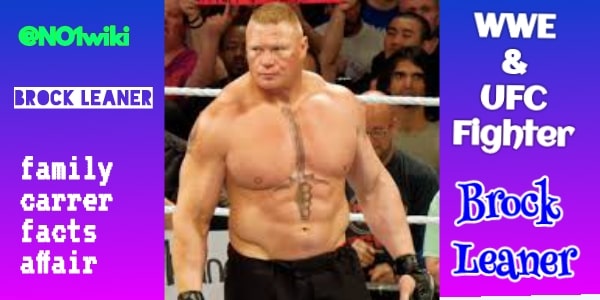 He is mainly famous for his performance in WWE and UFC. He is one of the best fighters in the fighting industry.

If you also love WWE, UFC, and other fighting series then you are in the right place and want to know more about this fighting beast then stick with this until the end.

Brock was born on 12th July 1977 at Webster, South Dakota, the U.S. in a higher middle-class family. He is very passionate about games and sports.

He used to play wrestling and football in his college days after a long struggle he gets his occupation as a Professional wrestler, mixed martial artist, American football player.

His wife Rena Marlette Lesnar is also a professional wrestler by a name of Sabel, who leave wrestling after marriage in 2006.

Brock is a father of 4 children and lives in Maryfield, Saskatchewan, Canada.

The Career of Brock Lesnar.

After his success at Bismarck State College and the University of Minnesota, then Lesnar signed with WWE in 2000. Where he fights for Ohio Valley Wrestling (OVW) and he won Tag Team Championship with Shelton Benjamin, but soon he signed for the main roster of WWE.

After his debut in WWE main roster in 2002 where Lesnar won the WWE Championship five months after debuting and this makes him the youngest WWE champion of history at the age of 25.

After his title loss to Eddie Gurrero at the No Way Out match in 2004 and again a big loss with Goldberg at WrestleMania XX, after some more losses Brock Lesnar left WWE and pursued a career in National Football League, but his name was cut before the start of the league in 2004.

In 2005, Lesnar returned to professional wrestling and signed with New Japan Pro-Wrestling and he won the IWPG Heavyweight Champion in his first match.

In 2006, he pursued a career in mixed martial arts (MMA), first he signs for Hero’s and won his first fight with Min-Soo Kim, in June 2007. Then he signs with the Ultimate Fighting Championship (UFC), he lost his UFC debut against Frank Mir and then won his second fight against Heath Herring.

Soon, Lesnar lost his title with Cain Velasquez at UFC 121. Due to heavy damages, Brock left UFC for surgery and again return in UFC 141, But loose his first match with Alistair Overeem and promptly retiring from MMA.

By the way, he has some best-selling pay-per-view events in UFC history which are UFC 100 and UFC 116.

In 2012, Brok Lesnar returned to professional wrestling and rejoining WWE. He can make his domination on the ring and get the name of the beast.

He achieved the status of a five-time Heavyweight Champion and also three times Universal Championship. He gains the title of longest world title reign in WWE since 1988 at 504 days.

Some Unknown Facts about Brock Lesnar.

Brock Lesnar is the longest world title reign in WWE since 1988 for 504 days.

He fights for a total of 9 mixed martial art matches and wins five of them and one match is draw.

He also has a Military career where he works as Army National Guard in 1994.

Brock also has criminal information in which he suffers from a criminal charge for improper tagging of an animal and also gets Penalty of $1,725 fine and six-month of hunting suspension.