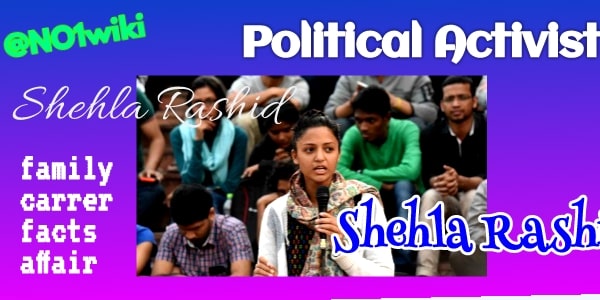 Shehla Rashid is a student and human rights, activist.

She is a vice president at Jawaharlal Nehru University Student Union (JNUSU) In 2015-16.

Currently, she is pursuing a Ph.D. degree from JNUS University.

She got the spotlight due to her movement where she is calling for the release of Kanahiya Kumar.

She played a leading role in visualizing the ‘Occupy UGC movement’ and pioneering the decision to “camp” at University Grants Commission (UGC) for fellowships.

The shore is also a vocal for the human rights situation in Kashmir.

If you want to know about this news icon who always be in the spotlight for human rights activists.

The real name of Shehla is Shehla Rashid Shora she was born in 1988 at Habba Kadal, Srinagar, Jammu, and Kashmir.

She is a member of a political party named, Jammu and Kashmir People’s Movement which she joined in March 2019.

She becomes popular when she fights for the minority section of Jammu Kashmir and she also gets lots of people’s support and popularity when she starts fighting for Kanhaiya Kumar.

The career of Shehla Rashid.

She is a famous political activist of India, she starts her career in Jammu and Kashmir where she fights for the rights of the minority section.

She participated in a ten-week certificate program in political leadership at the Indian Institute of Management Bangalore, after completing her graduation in Srinagar.

Sheila Rashid also works for HCL company as a software engineer and after that, she wants to work in politics which is her passion.

First, she starts a movement for acid attack women but that movement was close due to some political interference and after some time she leaves J&K and joins JNU.

In one interview Shora said that she grew up watching a “very violent image of India” but JNU gave her democratic space”.

In recent times she files a case of domestic violence in J&K high court against her father with the allegation that her father is a very abusive man.

Some unknown facts about Shehla Rashid