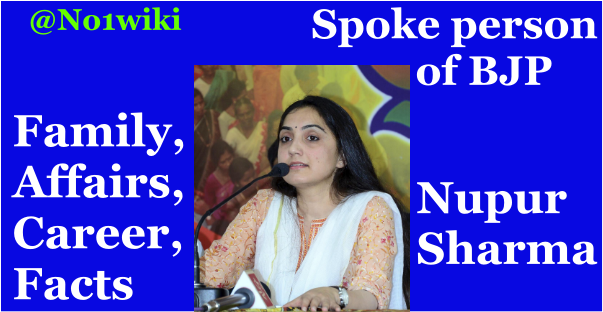 Nupur Sharma is an Indian politician and a well known lawyer from India. She is also a popular national spoke person of Bharatiya Janata party that is BJP.

If you want to know more about no more then you are at the right place. Today in this article we are going to discuss her early life, personal life as well as professional life too. So stick to this article until the end and you will get to know everything related to her life.

She was born on 23 April, 1985 and as per the year 2022 she is 37 years old. She was born in Dehradun, Uttarakhand, India and currently she is living in Delhi India. She follows Indian nationality and she is a well-known Indian lawyer also.

Her father’s name, mother’s name or any of her family or siblings’ names are not yet known on various social media accounts. But she is a well-known celebrity so we are trying to find out information related to her family as soon as possible.

If we discuss her career we must include that after receiving a master’s degree in law from the London school of economics at the University of London and then she became a popular lawyer.

After returning from London in 2010 to 2011 she joined the BJP Bharatiya Janata Party. In 2013 she became a member of the Delhi BJP working committee. In 2020 she was appointed as a national spokesperson of the BJP under the presidentship of J. P. Nadda.

On 26 May 2022, Sharma participated in a debate on the Gyanvapi Mosque dispute on the Times Now television channel, during which she made controversial remarks regarding the age of Muhammad’s wife Aisha at the time of their marriage and consummation of the marriage, which were seen to be insulting by several Muslim nations. The video clip of her comments was shared by Mohammed Zubair, the co-founder of Alt News, a fact-checking website, on social media.

Some unknown facts about Nupur Sharma