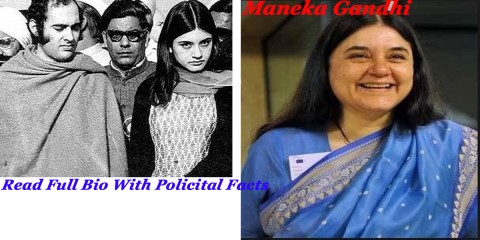 Maneka Gandhi – Full Bio with Facts of Indian MP on No.1 Wiki

If you are from India, then you must have to know about ministers of Indian government.

Here, we talk about one of the popular writer, activist, environmentalist and politician – Maneka Gandhi.

She has been a minister in four different governments, most recently she works under Narendra Modi’s government from May 2014 to May 2020.

Maneka Gandhi is also a writer of a number of books in the area of etymology, law and animal welfare.

If you are interested in politics then this will be a very interesting article for you.

But if you do not love politics, then also you have to read this to get some knowledge of the Indian government and the workers of the Indian parliament. So, share this article as much as possible.

She was born in 26th August 1956, in Delhi, India into Sikh family as Maneka Singh Anand.

Her father was an Indian Army officer Llt.Col.Tarlochan Singh Anand and her mother were Ameteshwar Anand.

Now, she is the widow of Indian politician Sanjay Gandhi.

How she met him and how she made her career in the Indian Government is very interesting to know, for that just sticks to this article until the end.

She is an Indian politician and the current member of Lok Sabha, which is the lower house of the Indian Parliament.

Maneka Gandhi is a part of BJP, current ruling party of India. She is a Minister of Women and Child Development in this party.

Maneka Gandhi authored a number of books in the areas of etymology, law and animal welfare, as these are her field.

Maneka is a self-described environmentalist and animal right leader in India. She earned lots of international and national awards and acclaim.

Maneka’s relationship with Indira Gandhi was disintegrated after the death of Sanjay Gandhi and they both start to argue with one another.

Maneka Gandhi publishes the book named – “The Complete Book of Muslim and Parsi Names”, in the recognition of her husband’s faith.

She later published the book – “The Book of Hindu Names (Penguin)”.

She became a successful politician with her husband and made her own party with Akbar Ahmad named “Rashtriya Sanjay Manch”.

She starts her career with Rashtriya Sanjay Manch from 1983 to 1988.

Now, from 2004 she is an active member of Bhartiya Janata Party (BJP).

This is so successful those days because her party won four out of five seats in 1983 Assembly Elections of Andhra Pradesh.

She contested the 1984 Lok Sabha Elections from Amethi, Uttar Pradesh but lost against Rajiv Gandhi.

In 1988, she merge her party with VP Singh’s party i.e.; Janata Dal and after that, she became the General Secretary of Janata Dal.

In November 1989, she won her first election and she became a member of Lok Sabha.

When VP Singh Government came in action, she became the Minister of State for The Ministry of Environment.

In 1996 and 1998, she fights the Lok Sabha election from Pilibhit as an independent candidate and won.

1999, she starts supporting BJP and also appointed as the Union Minister for Social Justice and Empowerment.

In 2004, she became one of the active members of BJP and fight for Lok Sabha Elections and again won from Pilibhit.

She became a member of the Union Minister of Women & Child Development in 2014 in the Narendra Modi Government.

She fights the 2019 Lok Sabha Elections from Sultanpur and won that election against BSP’s politician Chandra Bhadra Singh.