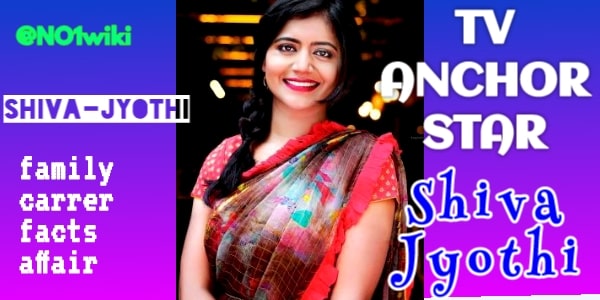 Siva Jyothi is an Indian television star, she is a TV Anchor and Newsreader in the Telugu Language.

She also is known as a name of Teenmar Savitri Shiva Jyothi.

She got fame and spotlight when she participates in one of the popular television reality show, Bigg Boss Telugu Season 3.

If you are interested in Bigg Boss Telugu and want to know more about Shiva Jyothi then read this article until the end.

She was born on 14th Feb 1991, in Nizamabad, Telangana, and holds the Indian Nationality.

She is well known as a news reader in Telugu language and really famous because of her performance in Bigg Boss Telugu.

Shiva Jyothi belongs to a medical background because her father is a doctor.

She also interested in nursing and biology but later she decided to change her career line and make the media field as her career.

Jyothi was able to achieve good success as a newsreader.

She also began to be known by her name when she participates in Bigg Boss Season 3 of Telugu.

The Career of Shiva Jyothi.

Shiva Jyothi is also is known as Savitri complete her primary education from her home place Nagampeta.

For high school study, she used to walk 8 kilometres. Her father wants to make her nurse.

She joined the Hyderabad Yashoda institute to pursue BSc in nursing, but she couldn’t continue it and in the middle of her study, she decided to change her field.

She completes the degree from an open university. Later, she decided to move on and make her career as a news presenter on channel V6.

She also hosted a TV show named “Teenmar” with Bithiri. Her funny style of conversation makes her very popular in the region.

She also is known for her anchoring style and also as an excellent newsreader in Telangana.

Net Worth of Shiva Jyothi

Some Unknown Facts about Shiva Jyothi.

Savitri was a student of biology and practising nursing but later she decided to move her career from nursing to TV anchor and news reporter.

Shiva Jyothi was very successful in gaining support and popularity from the public while participating in the Telugu reality show named “Bigg Boss Season 3”.

With her skills, talent, and a beautiful voice, she has to gain a huge fan following and regularly keeps her fans updated with the media world on Channel V6.

Shiva Jyothi also known as Savitri, she is a news anchor for V6 chanel and also anchoring some other TV show.

She famous because of participating in Bigg Boss Telugu for season 3.