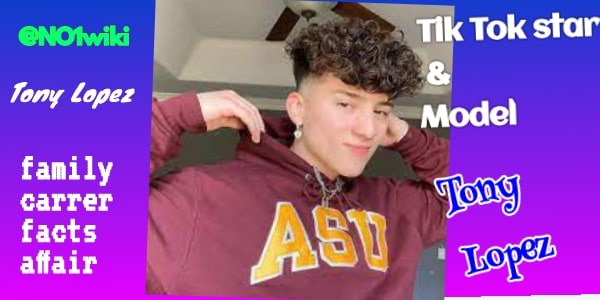 Tony Lopez is an American Tik Tok star and dancer, famous for his videos on Tik Tok and due to her handsomeness and popularity, he able to gain lots of companies.

He is also famous as a model, and if you want to know more about him, then you are in the right place, then stick with this article until the end.

Tony born on August 19, 1999, in Las Vegas, Nevada, America, in a higher middle-class family and very passionate about dancing.

But he gets a video sharing platform TikTok, and he starts uploading his dancing videos and his audience love this, and he becomes one of the popular Tik Tok stars.

Now, Tony is one of the reputated members of the TikTok collective Hhype House and currently live in Los Angeles with some other popular TikTok stars. He also uploads lots of content on Tik Tok by collaborating with them.

The career of Tony Lopez

Lopez starts his career as a dancer in his school and pep rallies. He and his brother Xavier are dancing for a very long time in several schools and local functions.

He started his journey in TikTok, and he started uploading his dancing videos on TikTok in 2018.

As of August 2020, Tony has more than 5,30,000 Twitter followers and seven million+ Instagram followers and 21.2 million followers on TikTok, and he also runs his youtube channel, which has 1.7 million+ subscribers.

After joining TikTok, he becomes one of the most popular and successful members of TikTok and uploads videos by collaborating with some big stars.

Both Tony and his brother live at the physical hype house in Los Angeles, and they spend lots of time creating and uploading lots of videos.

Some Unknown facts about Tony Lopez.

Tony Lopez starts his career as a dancing boy in school and local function, but now he has millions of followers and subscribers in almost all social media account.

He knows how to use TikTok and his knowledge make him one of the most popular and successful stars of TikTok and other social media platform.