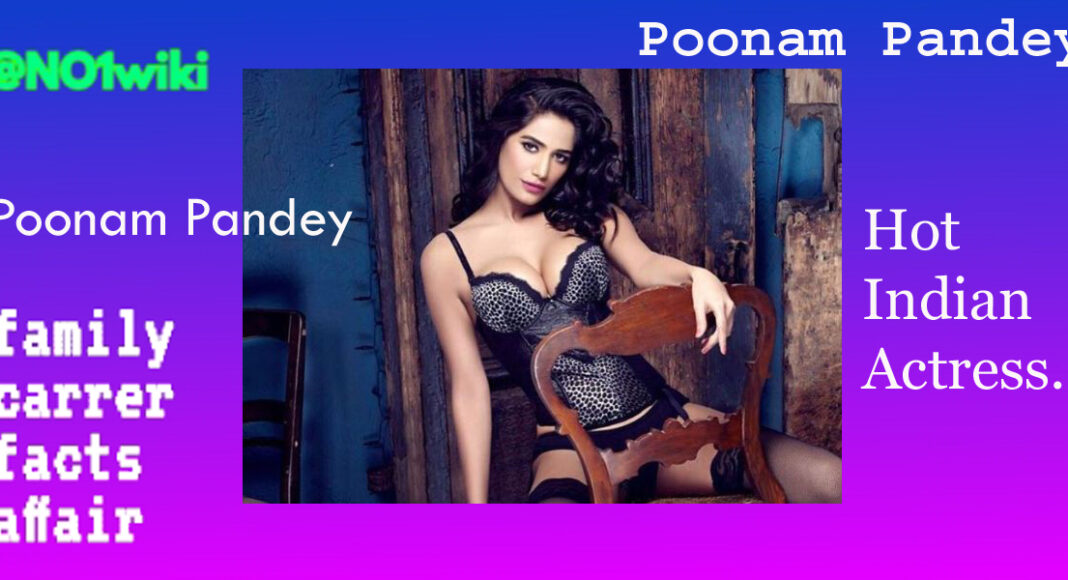 Poonam Pandey is an Indian film actress and model, her other name is Poonam Devi.

She also is known for her nude portrayal of online platforms.

She debuted in Bollywood with the film “Nasha” in 2013.

Poonam gets lots of popularity through her social media accounts especially through Twitter and Instagram when she started posting her semi-nude photos.

Her body revealing photos got lots of media attention and made her social media star.

She rose to the media spotlight when she promised to strip for the Indian cricket team if India won the 2011 Cricket World Cup.

As India in the world cup, however, she did not fulfill her promise because of public disapproval but later claimed that they denied her permission by the Board of Control for Cricket in India (BCCI).

She also uploads a sex tape in which she was with her Boyfriend on Instagram which was later deleted.

Poonam was born on 11th March 1991 at Kanpur, India. She began her career as a model in Mumbai.

She becomes one of the top nine contestants of the Gala drags Manhunt and Mega model Contest and appeared on the cover page of lots of fashion magazines.

Due to her popularity in fashion magazines, she soon gets a role in the Bollywood film “Nasha” in 2013.

After that film, she made some more films most of them are 18+ films.

Now, she is famous as a social media star due to her uploads on Twitter and Instagram.

The Career of Poonam Pandey.

In 2013, she was the female lead role in the film “Nasha”, playing the role of the teacher in that film.

The Mumbai mirror said that “she did not play seductresses but a proper, responsible drama teacher” and Poonam acting efforts are not well.

Poonam Pandey has banned advertisements for her films because she made posters highly vulgar, this said by a general secretary of Mumbai.

Now, she is a model but working as a social media star by posting lots of vulgar posts and her semi-nude photos which get lots of attention in media.

Some Unknown facts about Poonam Pandey.

Poonam becomes a sensation on YouTube with her stripping video in 2011.

For International Yoga Day, she uploaded a sensual yoga video millions of people saw which.

She was a Kingfisher calendar girl in 2012.

She did a “Grab Nasha Bikini Contest” on Twitter before the release of her film “Nasha”.

She was approached for Bigg Boss 7 but she refused the offer due to money issues.

Her stripped videos in 2011 were ranked among one of the most-watched videos on YouTube.

She is a huge fan of the Indian Cricket Team and a big fan of KKR in the Indian Premier League (IPL).