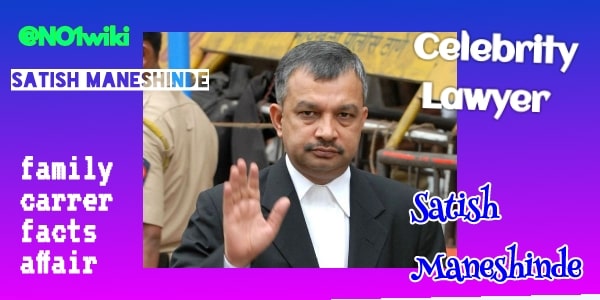 Satish Maneshinde is an Indian criminal lawyer famous for his high-profile cases where he handles cases for politicians, actors, and celebrities.

He manages many high-profile and famous cases like – 1993 Mumbai Blasts case for Sanjay Dutt, and the Drunk Driving case for actor Salman Khan.

So, if you also want to know who is lawyer choice for actors, and other celebrities then you are in the right place, just stick with this article until the end.

Satish was born on 1965 in Dharwad, Kkarnataka, India. He is currently 55 years old and come from very lower middle-class family.

He completed his early education from the government school of his area, and later he enrolls at Karnataka University College of Law from where he completed his graduate course in Bachelor of Commerce and then complete his LLB degree.

Since his school days, he is very passionate about criminal cases and law, and now he is one of the most successful criminal lawyers in our country.

The Career of Satish Maneshinde

Satish starts his career as a criminal lawyer in 1983 when he came to Mumbai, and after some time he started an internship under one of the most celebrated and best known criminal lawyers of India – Late Ram Jethmalani.

He works as a Junior lawyer and works for Ram Jethmalani as an apprentice for about 10 years and in this period he becomes very practiced with criminal cases in the civil and lower court.

He become headline when he take cases of Salman Khan and Snajay Dutt.

Some Unknown Facts about Satish Maneshinde

He is one of India’s topmost criminal lawyers, and advocate who charges around Rs. 10 Lakhs per hearing or ten lakhs per day.

He never interacts with so much and discloses any of his personal information with media.

Layah Heilpern – The host of The Layah...