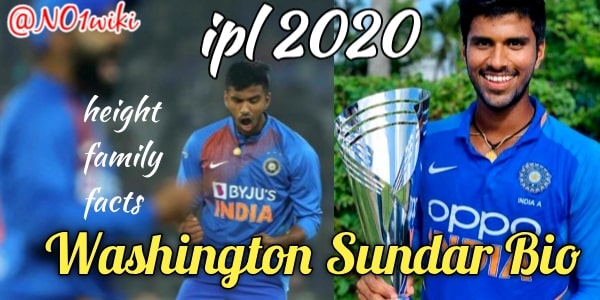 Washington Sundar is an Indian cricketer. He is a left-handed batsman and right-arm off-spinner in Indian U-19 cricket team.

He made his ODI debut for India against Sri Lanka on 13th December.

He is a new all-rounder, for which everyone is waiting to make a debut in international cricket.

Now, he is playing with Tamil Nadu and he bought by the Royal Challengers Bangalore in 2018 IPL auction.

If you are interested in cricket and in IPL 2020, then stick to this article and get full info about Washington Sundar.

Washington Sundar was born on 5th October 1999 in Chennai. He was named by his father in honour of a mentor, P.D. Washington.

He made his ODI debut for India against Sri Lanka on 13 December 2017.

He was selected for 2019 T20 Series against Windies.

He is an Indian all-rounder cricketer who now plays with Tamil Nadu and Bangalore in IPL 2020.

The career of Washington Sundar.

Washington Sundar made his first-class debut for Tamil Nadu in the 2016-17 Ranji Trophy on 6th October 2016.

He scored his maiden first-class century, batting for Tamil Nadu against Tripura in 2017-18 Ranji Trophy.

In November 2017, he was named in India’s Twenty20 International squad for their series against Sri Lanks.

In March 2018, he was selected in India’s squad for the 2018 Nidahs Trophy against Sri Lanka and Bangladesh.

During this series he bagged a maiden 3-wicket, making him the youngest ever T20 player to do so.

Washington Sundar was named the player of the series for his performance. He becomes a regular member of the Indian Twenty20 team.

Some Unknown facts of Wahington Sundar.

Washington’s father was a Ranji Level cricketer and dreamt of making his son a cricketer.

His father had a mentor who pays his fees and buy him bats and his name is Washington, on that name his son Sundar got his name.

He was initially a batsman but later moulded himself into an off-spinner with time and now he is an all-rounder.

n Tamil Nadu Primer League 2016, Washington took 11 wickets in 9 matches at an average of 12 and an economy rate 5.54, this is one more record which is on the name of Washington Sundar.