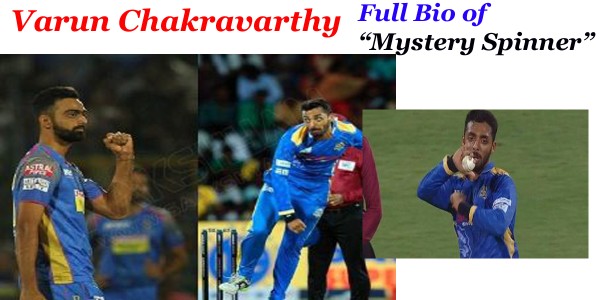 Varun Chakravarthy is an Indian cricketer and he is going to play IPL 2020 with Kolkata Knight Riders.

Varun Chakravarthy was the leading wicket-taker for the Tamil Nadu in the Vijay Hazare Trophy of that year.

He made his first-class debut for Tamil Nadu in the Ranji Trophy on 12th November 2018.

He made his Twenty-20 debut for the team on 27th March.

This year he was released by Kings XI Punjab and in the 2020 IPL auction, he was brought by the Kolkata Knight Riders.

So, in IPL 2020, you see Varun Chakravarthy in the team of Kolkata Knight Riders.

Varun comes from a middle-class family. He started playing cricket from his school time and his performance is very best.

He played cricket as a wicket-keeper batsman from the age of 13.

He faced lots of rejections in the age group cricket. After which family forced him to complete his studies.

Varun complete his education from SRM University in Chenai.

After completing his studies Varun also worked as a freelance architect, Later he also worked for 2 years in one company.

But Varun Chakravarthy is very passionate about cricket so he again started playing cricket on weekends and try to make cricket as his full time profession.

The Career of Varun Chakravarty

At the age of 25, Varun quit his job and choose cricket as his future.

Varun got hurt in his second match in batting and did not get a chance to play cricket for a long time then he started spin bowling.

Varun Chakravarty learned a lot of variations in his spin bowling and this was the reason that people started to known his by the name of Mystery Spinner.

At the age of 27, Varun got a chance to play in the Tamil Nadu Premier League with the Siechem Maduri Panthers team.

Due to his best performance and his success, he was called as a nets bowler for Chennai Super Kings and Kolkata Knight Riders.

Some Unknown facts of Varun Chakravarty.

At the age of 13, Varun Chakravarty started playing cricket as a wicket-keeper-batsman.

At the age of 17, due to lots of rejection he leave cricket and try to make his career in architect.

After two years he left his job and choose cricket as a career.

He made his come back as a spinner and started playing for Jubilee Cricket Club in the fourth division.

Varun Chakravarty was also inducted into the Tamil Nadu’s Karaikudi Kaalai team, but he couldn’t get an opportunity to play.

In 2018, Varun Chakravarty got selected to play for Tamil Nadu, and he made his name in List A for Vijay Hazare Trophy.

In IPL 2020 the “Mystery Spinner” is playing with KKR.