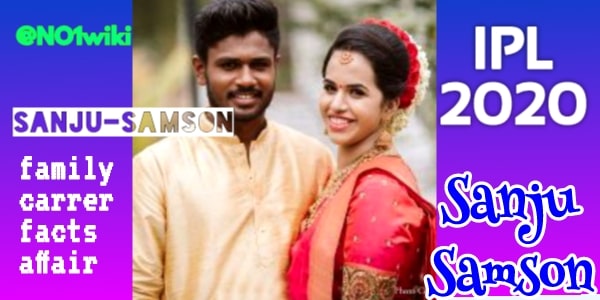 Sanju Samson is an Indian Cricketer well known for his best performance in all types of matches he played yet.

He is the youngest IPL player who scores a half-century.

If you are interested in IPL and watching all matches of IPL 2020 then this article is very interesting for you.

Read full bio with some unknown facts below in this article.

Sanju’s full name is Sanju Viswanathan Samson. He was born on 11 November 1994 in Thiruvananthapuram.

Sanju is an Indian cricketer who represents the Kerela cricket team in domestic cricket.

His mother name is Lily Samson and his father name is Vishwanath Samson. His father was a normal police constable at Delhi Police.

As we all know, he is a very good cricketer and also made so many remembering moments in this field.

Like we all know he is the second-youngest player who scored a half-century in the IPL and also in Champions League Twenty-20.

Sanju is an only and first wicket-keeper batsman who scored a double hundred century in Vijay Hazare Trophy.

Also, he was selected as Under-19 Vice-captain for the 2013 Top End Under-19 Series in Australia.

He scored a 212 for Kerela against Goa. Also, this is a record of making double hundred in Vijay Hazare Trophy.

The Career of Sanju Samson

A 15-year boy get to play a match in the Ranji trophy for Kerela and got his first chance to earn name and fame in the whole country.

Sanju was a member and captain of Under-13 cricket team for Kerela.

He was such a good player who remained as Captain for Under-16 and Under-19 Kerala State Cricket Teams.

In the year 2013 Sanju Samson scored a century which helped India to win the Under-19 Asia Cup held in UAE.

In the year 2014, Sanju Samson was selected in BCCI as vice-captain of team India for the ICC Under-19 World Cup at Sharjah. In that tournament, Sanju was a glowing star and also a game-changer.

In that match, Sanju Samson scored 85 runs only on 45 balls which made everybody feel proud of him. He made this record against Papua New Guinea.

On 29 April 2013 IPL Sanju scored 63 runs out off 41 balls along with his partner Shane Watson, who scored 68 runs out off 46 balls, and they both became the reason for the Rajasthan Royals victory in that match.

In 2020, he plays Indian Premier Lague with Rajashthan Royals.

Some Unknown Facts of Sanju Samson.

Sanju started playing cricket for Kerala under 13 teams, where he was a captain of that team and hit a century in hist first debut.

When he was 19 years old, he selected to play for IPL with team Rajasthan Royals for 10 Lakhs (INR), but after his good performance, he was retained by his team for 4 crores (INR).

His father left his job as a Police constable in Delhi, he supports him in his cricket career.

His father wants his son to becomes an IPS officer.

In 2013-14 Under-19 Asia Cup, Sanju Samson scored a century in 87 balls in the final against Pakistan to win the trophy.