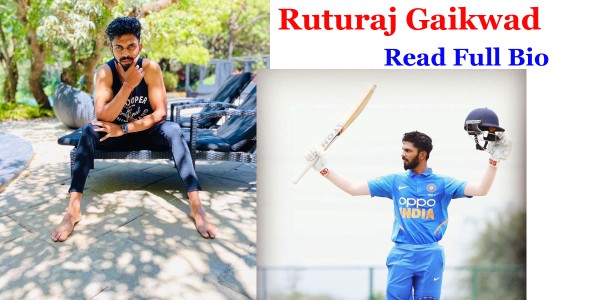 Ruturaj Gaikwad is an Indian cricketer. He made his first-class debut for Maharashtra in 2016 in Ranji Trophy.

As we all know that Indian Premier League at its peak.

All the new youngsters are ready to prove themself. Ruturaj Gaikwad is one of them.

Ruturaj Gaikwad was born on 31st January 1997 to Savita and Dashrath Gaikwad.

His childhood dream is to be a successful Indian cricketer.

Ruturaj started playing leather ball cricket by the age of 5.

In one interview Ruturaj says that “I would like to also thank my academy, Vengsarkar Cricket Academy, which is located in the PCMC area”.

The Career of Ruturaj Gaikwad.

Ruturaj Gaikwad grabbed the spotlight during his Under-19 days.

He scored second-highest score in the 2014-15 Cooch Behar Trophy. He scored 826 runs in 6 games with three centuries, and a half-century.

In December 2018, he was bought by the Chennai Super Kings in the player auction for 2019 IPL.

Ruturaj Gaidwak scored a century against England Lions in Jan 2019 for Board President’s XI. This inning helped him to get in India A squad for the first time and he play with India A in June 2019 ODI series against Sri Lanka A.

In August 2020, Gaikwad tested positive for COVID-19 before the start of the 2020 Indian Premier League.

Some Unknown Facts About Ruturaj Gaikwad.

Ruturaj began his cricket career at the age of 12 at the Vengsarkar Cricket Academy.

His father is Officer in Defense Research and Development Organization and his mother is a municipal teacher.

Ruturaj started playing with a leather ball when he was only 5 years old. He dream about his career as a cricketer when he was 12 years old.

He was India’s second-highest run-scorer in Cooch Behar Trophy for 2 back to back year.

Ruturaj Gaikwad also loves to play Tennies and before cricket, he wants to become a tennis player.

In IPL 2019 Chennai Superkings (CSK) bought him in auction at INR 20 Lakhs.

Ruturaj Gaikwad is a part-time off-spinner as well.