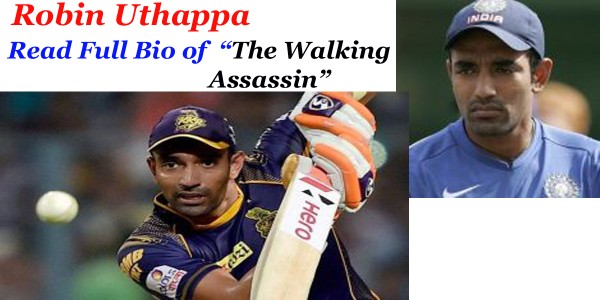 Robin Uthappa is an Indian cricketer. He plays for Kerala in domestic cricket and Rajasthan Royals in the IPL.

Uthappa made his International debut through One Day International match against England in the 7th day of the English tour of India in April 2006.

He made a very successful debut with 86 run as an opening batsman and run out.

It was the highest score for an Indian debutant in a limited-over match.

He got a nicknamed of “The Walking Assassin” for his tactic of charging the bowler.

When he finished his Ranji Trophy season, he was the highest run scorer in that season.

His full name is Robin Aiyuda Uthapa. In cricket he got a name of The Walking Assassin.

He received his education at Sri Bhagawan Mahaveer Jain College which comes under the umbrella of Jain University, Bangalore.

The career of Robin Uthappa

Robin first came in public attention when he made 66 run in India B against India A in the Challenger Trophy 2005.

In that same tournament, Robin Uthappa made a match-winning 100 run in 93 balls which give him a chance to play for the big league.

Previously, he had been a member of the India Under-19 team that won the Asia Cup.

Robin Uthappa List A batting average is 40 with a strike rate of 90, and that has made him regarded as cricket specialist.

He was recalled to the ODI side in January 2007 for series of Cricket World Cup held in the West Indies in March-April 2007.

He played in all three types of cricket games, but only 30 runs in total as India suffered a shock defeat to Bangladesh and a loss to Sri Lanks resulting in the team does not qualify for Super 8 stage.

He used to bat as an opener, but in 7th ODI of that series, he came in the unfamiliar position of no. 7 and still made 83 runs in less than 10 overs. Uthappa kept a cool head to take India to the target with two balls to spare in a remarkable victory.

Robin Uthappa also scored a crucial 50 run against Pakistan in 20-20 World Cup in South Africa, he became the first Indian to score 50 in a 20-20 International Match.

After his very impressive performance in the seventh season of IPL, he has selected as a captain of the India A team for its tour of Australia in July 2013.

Robin Uthapa was included in team India in which he toured Zimbabwe in 2015.

In june 2019, Robin Uthappa moved from Saurashtra, and join Kerala, ahead of the 2019-20 Ranji Trophy season.

Robin suffered from Epilepsy at the age of 10, due to which he had problems in maintaining weight.

His father Venu was an international hockey umpire and after retirement as an Umpire, he served as the president of the Karnataka Hockey Association.

Robin Uthappa is the first Indian player to make a half-century in a T20 international match against Pakistan and this record was made in 2007.

He is very close of Irfan Pathan and both are best friend.