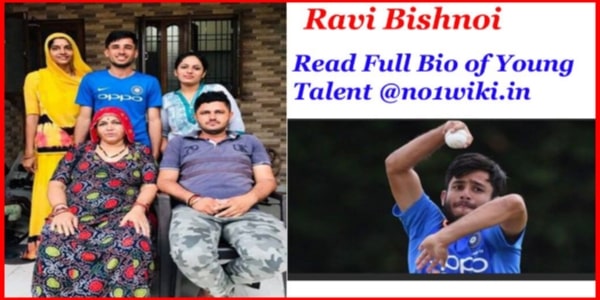 Ravi Bishnoi represtented India at the ICC U-19 World Cup in 2020.

He was bought by the Kings XI Punjab ahead of the 2020 Indian Premier League.

If you are interested to known about this young cricketer then stick to this article untill the end.

Ravi was born on 5th September 2000 in the small village called Birami near Jodhpur.

His father had other plans for him but his coach convinced his father to let him play cricket and try to make his career in cricket.

He made his debut by plaing for Rajasthan in 2018-19 Syed Mushtaq Ali Tournament.

After getting noticed from there, he was selected for U-19 and latter he also played in Vijay Hazare Trophy and Ranji Trophy for Rajasthan in 2019-20 season.

He was also roped in IPL franchise Kings XI Punjab in IPL auction 2020 for INR 2 crores.

The Career of Ravi Bishnoi.

He was also in India’s squad for the 2020 Under-19 Cricket World Cup and he was named the man of the match.

Some Unknown Facts about Ravi Bishnoi.

Back in 2013, due to limited finance and opportunity, Ravi and his friends built a cricket academy under the name of “Spartans Cricket Academy” in Jodhpur, Rajasthan.

Ravi Bishnoi used to travel on his bycycle to his academy which was 20 Km away from his home.

In 2018, Bishnoi skipped his 12th standard exams on getting the opportunity to bowl at the net for Rajasthan Royals camp, in Jaipur.

Ravi Bishnoi finished with 17 wickets in U-19 Ccricket World Cup 2020, the highest in the tournament and also the most by an Indian player in the history of the tournament.

He consistent performance helped him to join the team of Kings XI Punjab for IPL 2020 and he get 2 crore in this IPL contract.

The young talent, Ravi Bishnoi is seen by the cricket franternity as a future of spin bowling as a wizard for Indian team.

Ravi Bishnoi admires the legendary leg-spinner, Shane Warne. He said he grew up watching videos of Waren. But his current favourite bowlers are Ravichandra Ashwin, Yuzvendra Chahal, and Rashid Khan.