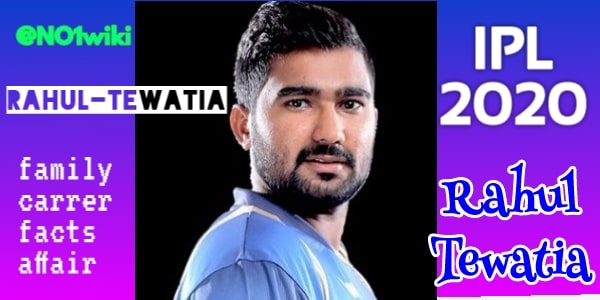 Rahul Tewatia is an Indian cricketer, who participating in IPL 2020 with a team of Rajasthan Royals.

He became famous for his IPL record in 2019, he made a record of taking the maximum number of catches by a non-wicket-keeper player in IPL.

If you are interested in IPL, then this is a very interesting article for you which gives you lots of unknown facts about Rahul.

As we all know, he is a good batsman and an honest player.

He generally does batting from Left-hand side. And also he is a Right-arm leg break bowler.

He is an Indian cricketer who plays Ranji Trophy for Haryana.

His first match was against Karnataka at Bansi Lal Cricket Stadium. He also won Vijay Hazare Trophy on 25 February 2017. Also, he made his List A debut for Haryana in the year 2016.

His domestic team is Haryana but in IPL 2020, he is playing from Rajasthan Royals.

The career of Rahul Tewatia

In the year 2014, the IPL team Rajasthan Royals bought Tewatia.

But in February 2017 Kings XI Punjab bought Tewatia he played for that Team only at the year 2017. Again in January 2018, he was bought by another Indian Premier League team that was Delhi DareDevils.

During the year 2019, he created history to always remember him and the record was “taking the most number of catches (4) by a non-wicket keeper in an IPL inning.”

Again in the year 2020, he was bought by Rajasthan Royals in 2020 Indian Premiere League.

The most memorable day of the year 2020 was when Rahul Tewatia equalled Chris Gayle.

By creating a new record of hitting the most number of sixes in an over of IPL match, and also he scored his Maiden IPL fifty in the same match.

This year also Rajasthan Royals made one more record of the highest run ever chased in Indian Premier League history.

Some unknown facts about Rahul Tewatia

Rahul is a left-hand batsman.

Also Rahul is a wrist spinner.

He made his first-class debut in 2013 for Haryana against Karnataka in 2013-14 Ranji Trophy.

Very few people know that he is a huge fan of Tennis Player ‘Roger Federer’.

Rahul’s uncle who is an sportsman is his inspiration for every match which he played.