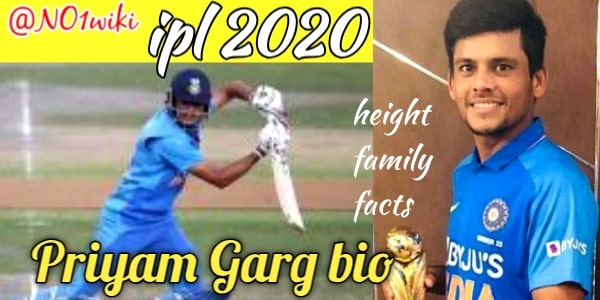 Priyam Garg is an Indian cricketer. He made his list A debut for Uttar Pradesh in 2018-19 in Vijya Hazare Trophy on 19th Spet 2018.

he scored double century in first-class cricket and made his 20-20 debut for Uttar Pradesh, Syed Mushtaq Trophy on 21st Ffeb 2019.

He is now represent Uttar Pradesh in cricket and only play domestic crickets.

But he selected for the IPL 2020 and he playing with Sunsrisers Hyderabad for a whopping 1.9 crore.

He is an Indian cricketer who playing with domestic players right now.

10-years old Priyam Garg burst onto the scene in a List A debut for Uttar Pradesh during 2018-19 Vijay Hazare Trophy.

This youngster proved his talent with a fine double century against Tripura.

A year later after his performance, Priyam made his T20 debut for UP in the Syed Mustaq Ali Trophy.

More good news is that this young star participate in the Duleep Trophy, Deodhar Trophy and Indian Captain for the 2020 Under-19 Cricket World Cup.

To make matter even better then he will lead the Team India in the under-19 World Cup in South Africa next year.

Being only 20 years, Priyam’s career is just taking off, and he become one of the power of SRH team in IPL.

Priyam Garg has the potential to be a game-changer and a valuable asset to the Sunrisers Hyderabad for IPL 2020.

The career of Priyam Garg

He made his first-class debut for Uttar Pradesh in 2018-19 in Ranji Trophy.

In December 2018, during a match with Tripura, he scored his maiden double century in first-class cricket.

Some Unknown facts of Priyam Garg.

When he was a kid, his family could not afford a television, and he used to watch cricket matches a nearby paan shop and for that he sit on paan shop for whole day.

He comes from finnancially weak family. During his childhood days, his father used to do odd jobs such as selling milk, driving vans, and delivering newspapers to support Priyam’s cricket training.

He has been playing cricket since he was 6 years old, and when he was 8 years old, he joined the Victoria Park cricket training ground in Meerut.

Garg had started as a fast bowler, but his coaches Ashwani Sharma and Sanjay Rastogi advised him to pay more attention in batting, as he was good in batting also.

Garg also wanted to become a bowler, as Bhuvneshwar Kumar and Praveen Kumar and also trained they also trained from the Victoria Park training ground.

In 2018, he was not selected due to a drop in form. Reportedly, the selectors decided to give him time and let him regain his form and confidence.

In an interview, after he was named as the captain of the U-19 team, he said –

“The world Cup will be a big opportunity. That’s the event where you are noticed, get everyone’s attention and I would love to play a big inning there. It is a balanced side. We have been playing together. This would help us in South Africa.”