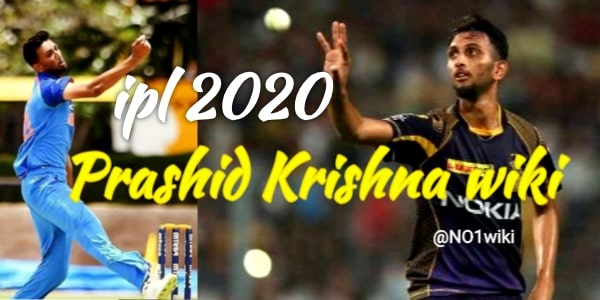 Prasidh Krishna is an Indian cricketer who plays for the Karnataka cricket team in domestic cricket.

He came in spotlight in India tour of 2015 in which he played a wonderful match with 5 wickets on 49 runs with Bangladesh.

If you are interested in cricket you like to read the interesting facts of this KKR player.

Yes! he is a member of Kolkata Knight Riders in IPL 2020.

So, if you are interested then read this article till the end and give us your valuable comment.

Prasidh Krishna was born on 19th February 1996 in Bengaluru. He is an Indian Cricket Player by profession.

He made his List Aa debut for Karnataka in 2017 Vijay Hazare Trophy.

He was the leading wicket-taker of the Karnataka team.

Now, he plays for India team A and Karnataka for domestic matches and Kolkata Knight Rider for IPL.

The career of Prasidh Krishna

Prasidh Krishna is an Indian cricketer who came in the spot light when he plays a match from India A with Bangladesh A in 2015.

In Bangladesh Tour in 2015, he made his first-class debut in that match all the three frontline pace bowlers of India was absent, then all responsibility of bowling came on the shoulder of Prasidh Krishna.

He took a wicket off his very first ball of over, dismissing Rony Talukdar, before him, he also takes the wicket of 4 more Bangladeshi players.

After that in April 2018, he was bought by the Kolkata Knight Riders team in the 2018 IPL season as a replacement for one injured player.

On 6th May 2018, he made his first debut match in IPL and he played very well.

Some Unknown facts of Prasidh Krishna.

He is best and leading wicket-taker in Karnataka team.

He comes in the spotlight when he takes 5 wickets alone in a single match against Bangladesh team A in 2015 tour of India A.

He belongs to Bengaluru state in a well middle-class family.

His price tag for IPL 2020 in Kolkata Knight Rider is INR 3 Crore, this amount shows the importance and who best he is in his match.