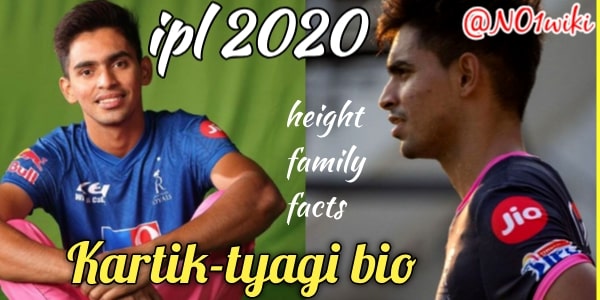 Kartik Tyagi is an Indian cricketer. He made his first-class debut for Uttar Pradesh in 2017-18 through Ranji Trophy on 6th October 2017.

If you are interested in IPL and if your favourite team is Rajesthan Royals then you are in the right place.

Stick through this article till the end and you get something very interesting in this article.

Kartik Tyagi was born on 8th November 2000 is an Indian cricketer. He made his debut through Ranji Trophy.

He was named in India’s squad for the 2020 Under-19 Cricket World Cup.

His father Yogendra Tyagi, a farmer and live in the village named Dhanaura, in Uttar Pradesh.

He was very interested in playing cricket since childhood. His father also encouraged Kartik to continue his training in Meerut’s CVPS Cricket Academy.

Now, he plays in Under-19 cricket but his main domestic team is Uttar Pradesh for Ranji Trophy and any other national tournaments.

The career of Kartik Tyagi

He also attracted the attention of the selectors by performing brilliantly in all these national matches.

In the recent match, he played against England, Bangladesh, Afganistan at the international level.

He made his List A debut for Uttar Pradesh in 2018 through Vijay Hazare Trophy.

he also selected in the squad of Under-19 Cricket World Cup.

He is a very talented bowler which can become the future of Indian cricket, which you can see this through his cricket stats and bowling records.

Some Unknown Facts About Kartik Tyagi.

He is Son of the farmer and belongs to the lower-middle-class family.

He starts his cricket career very soon when he started to play with Under-14 matches.

His father supports him very well to continue his cricket training with lots of financial problems.

Rajasthan Royals have to include Kartik in their IPL 2020 team with a bid of Rs. 1.30 crore.

He impressed the legendary cricketers with his wonderful fast bowling.

Kartik Tyagi had fractured his leg while playing football during the warm-up before the start of his second Ranji match.

Later he suffered an injury in the pelvic region and therefore couldn’t play any other Ranji Matches.

Tyagi father had sold his farmland of nearly 2.5 acres for his treatment, but all these did not stop him to play cricket and he can become one of the finest bowlers of the Indian team.