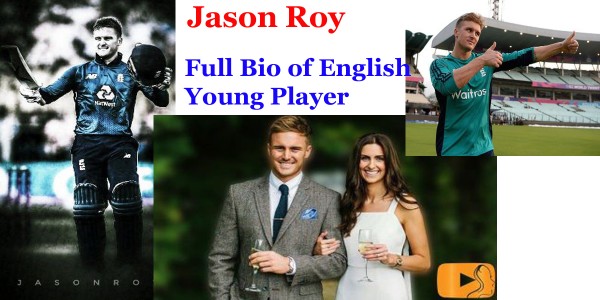 Jason Roy is a south-African-born English cricketer who plays for England.

He is an all-format player and for Surrey Country Cricket Club in domestic cricket.

He was a part of the England international team who won the 2019 Cricket World Cup.

He holds the record for the highest individual One Day International linings by an English batsman.

Roy is ranked in 10th in ODI batting in Oct 2019 and 17th in T20 batting ranking according to ICC Player Rankings.

In IPL he plays with Delhi Daredevils.

If you are interested in cricket then read this article until the end and get full information.

He is born in South Africa, Jason Roy moved to England with his family when he was 10 years old.

He is a right-handed batsman who plays in the middle order in first-class matches.

He was the first batsman to be given out for obstructing the field in T20 history.

Jason Roy took an A-level examination in Sports Science and Business in 2008 and was offered a place at St. Mary’s University College.

But he refuses this opportunity to concentrate on cricket.

The Career of Jason Roy.

When he moved to England from Africa, he attended the Hawthorns School for a few years, then Whitgift School.

He is the very best player of cricket in his school days. He represented Surrey in age-group cricket from Under-11 to Under-19.

He took part in the Surrey Under-19 tour to South Africa in 2007, where he top-scored for Surrey.

Some Unknown facts of Jason Roy.

Roy is a South Africa by origin.

His family migrated from South Africa when he was 10 years old.

He once donated his Debut England T20 t-shirt for the Stem Cell Foundation.

In 2008, he gave an A-level exam in Sports Science and Business and he gets a seat at St. Mary University which is the very top college of England, but he refuses this opportunity and chooses cricket over it.