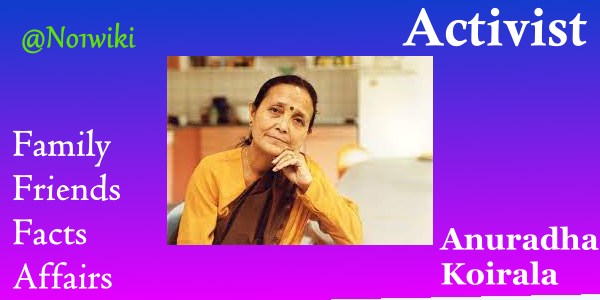 Anuradha Koirala is a Nepalese social activist and the founder of Maiti Nepal – a non-profit organization in Nepal dedicated to helping victims of sex trafficking. She is mainly famous because of appointed as the first governor of Bagmati Province, and she was elected and chosen as governor by the Government of Nepal.

If you want to know more about him, you are at the right place for this article, and till the end, we will let you know about his date of birth, educational qualification and family friend, siblings and much more cystic to this article and in the end.

She was born on 14 April 1949 in Kathmandu, Nepal. She is 72 years old now as of 2021. She is a well-known politician and transit home at the Indo-Nepal border towns, preventive homes in the countryside, and an academy in Kathmandu.

In November 2017, Koirala joined the Nepali Congress party. She has won so many awards worldwide, and she has been called the “Mother Teresa” of Nepal for her work. Between 1993 and 2011, she and her organization have helped rescue and rehabilitate more than 12,000 women and girls.

She belongs to a normal middle-class Nepali family, and by profession, she is a social activist. She always used to share about her parents in the media. Her father’s name is Colonel Pratap Singh Gurung, and her mother’s name is Laxmi Devi Gurung.

As the name suggests, Maiti Nepal (“maiti” means “mother’s home” in Nepali) has been a refuge for women rescued from the brothels in India. The women can stay in the homes run by Maiti Nepal until they can return to their homes, or if not accepted by their parents and society, they may stay until they become able to live on their own.

She had won many awards during her career. These awards are as follows: Trishakti Patta Award in 2002, the Courage of Conscience Award from The Peace Abbey Foundation in 2006, German UNIFEM Award in 2007 and Queen Sofia Silver Medal Award in 2007.

Some unknown facts about Anuradha Koirala