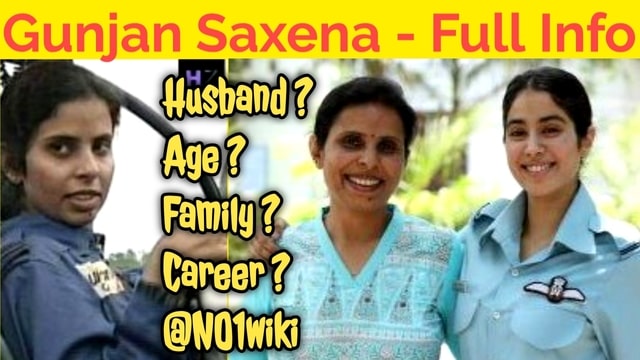 Gunjan Saxena – Full No.1 Info of Husband, Age, Family, and Career on No.1 Wiki

In 2004, after serving 7 years as a pilot, her career as a helicopter pilot ended.

In 2020, one Bollywood movie – Gunjan Saxena : The Kargil Girl, was made which is inspired by her life.

Here, when you read below you able to know full wiki, bio, age, husband, career, father, family, and some unknown facts related to Gunjan Saxena.

Gunjan is best known as the first women combat aviators, who entered in the war of Kargil in 1999 along with her fellow lieutenant Srividya Rajan.

Gunjan was born on year 1975, and currently 45 years old.She complete her education from Delhi.

She born and brought in a family with an army background, Gujan decided to join the army with air force after completing her graduation.

How she got the opportunity on that time when no one allow females to work is given below in career section.

Read full to get why Bollywood film made on her.

Career as a Woman Pilot

In 1994, Gunjan joined the Indian Air Force Acadmey with 25 other female trainee.

She got her first posting in Udhampur, Jammu and Kashmir.

Gunjan is waiting for an opportunity to serve herself for country and she got that oppoetunity during kargil war (1999).

When the Kargil war broke out between India and Pakistan. Gunjan Saxen became the first women to fly in the combat zone.

Indian army has two major operations which lead to the triumph during the War and those operations are – Operation Vijay and Operation Safed Sagar.

Gunjan was associated with Operation Vijay with the tasks like – surveillance of Pakistani positions in the war zone, and the provision of supplies.

This opportunity is very great because, on those days, women were employed neither got any chance to work outside the house.

Air Force also women were not allowed to fly in the war zone because of extreme physical and mental stress. But, when Kargil war broke out, the Indian army was in desperate need of all its pilots to perform their duties with full accuracy in order to attain the victory, against Pakistan.

Hence, due this situation womens pilots were called on to perform their duties.

So, In 1999, Gunjan docked in the Kargil, representing an Indian Air Force flight officer and make India proud.

Gunjan escort her helicopter into the steep valleys of Kargil, battling through the skies and rescue the injured soldiers.

She and her fellow lieutenant Srividya Rajan had to even preclude the Pakistani fires while on the mission.

In one interview she says that picking up the dead and wounded bodies from the mountain edges, with flying chopper requires an excessive skill. She often had to complete her task with Pakistani gunfire and missiles targetting her and her helicopter. But, evacuating the injured soldiers and saving the lives motivate her the most.

Gunjan Saxena was the first woman to receive the Shaurya Chakra Award for her magnificent and courageous role in the Kargil War.

Around 500 Indian army officers, soldiers and jawans were killed during the Kargil War. While Gunjan performing her duty as the flight officer Gunjan’s helicopter was fired upon by the Pakistani forces and she had a very narrow escape and she gets her life.

Due to her courage in Kargil War Gunjan Saxena got a name of “Kargil Girl”.

She always wanted to be part of the Indian Air Force. In one interview she talks about her father and said: “He would always tell me and my elder brother that he wanted us to ride from a tricycle to an aeroplane. And when as a fifth grader I was shown a cockpit by a cousin who happened to be an Indian Airlines pilot, I decided that I only wanted to fly”.

Gunjan Saxena completes her education from Hansraj College, Delhi and after that, she also joined Safdarjung Flying Club, New Delhi to learn the basics of flying. She started applying to get a job as a pilot.

In 1994, Gunjan Saxena got a chance and she selected along with a group of 25 young women, the first batch of women IAF trainee pilots.

In 2020, a Bollywood biopic movie was made on Gunjan Saxena in which lead role was played by Jhanvi Kapoor as Gunjan Saxena.

After seven years of her service in the Indian Military, Gunjan career was ended in July 2004 as a Chopper Pilot.

Currently, Gunjan is a housewife at Jamnagar in Gujarat and her husband was an Indian Air Force Officer.