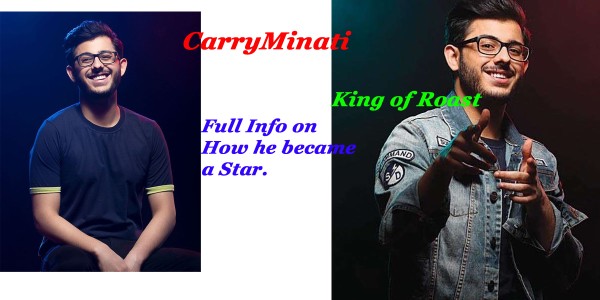 Ajey Nagar – How Became CarryMinati – Full Bio on No.1 Wiki.

Ajey Nagar is the real name of a man who is behind the YouTube channel named – CarryMinati.

Either you are a fan of TikTok or a Hater of TikTok. If you are using Social Media regularly with TikTok and YouTube, then you must know who is the CarryMinati.

CarryMinati is the name of the YouTube channel which is owned by a man named – Ajey Nagar, and he became famous and became a trending topic on Twitter, Insta, and other social media platforms.

He became famous for his video on TikTok.

No! he does not make another viral video on TikTok, although he Roast TikTok videos, and due to his best comedy performance in that roast video, everyone starts loving CarryMinati.

Ajay is known for his famous YouTube channel CarryMinati. Now he has 24 million YouTube subscribers, which is the highest subscriber for the individual creator in YouTube India.

He uploads roast and music videos on that channel. Music is basically started after his most viral video i.e.; Roast Video on TikTok.

The career of Ajey Nagar starts with his first YouTube channel which he created when he was 10 year’s old since 2014.

In 2014, the channel’s name was “AddictedA1” and Ajay upload game footage video along with his reactions to the game.

In 2015, he created another channel with the name “CarryDeol”, and he uploads gameplay footage of ‘Counter-Strike: Global Offensive’ with mimicking Sunny Deol.

Soon, that channel was renamed to CarryMinati and he started uploading “roasting videos”.

In 2017, Ajay started one another YouTube channel called CarrysLive, where he live-streams himself playing video games.

How Ajey Nagar Became Most Loveable Creator of YouTube India In Entertainment field.

In 2020, Ajay uploads a video on his YouTube channel – CarryMinati.

That video changes the future of CarryMinati channel and makes Ajey Nagar a man with the most subscribed individual creator in YouTube India.

That Video has a tittle “YouTube Vs TikTok – The End“.

In this video, he roast creators of TikTok, such as Amir Siddiqui.

That video became the most viral video in Ajay’s channel. Everyone loves his way of roasting TikTok creators in that video.

This results that – the video Nagar published became the highest likes video on any non-music video on YouTube in India.

And this resulted in hashtag #CarryMinatiRoastVideo to trend on Twitter.But, that video was deleted by YouTube India.

His fans suspect that the TikTok creators are behind the removal of video.

When his video removed from YouTube, lots of reviews bombed to the TikTok app on the Google Play Store and its rating down from 4+ star to 1 star.

After his most viral video, Carryminati upload another video whose title is “Stop Making Assumptions| YouTube Vs TikTok: The End”

Again, this video received lots of support and that video is currently most liked non-music video on YouTube in India.

Ajey Nagar also sings a song and publish on his YouTube channel CarryMinati.

Some Interesting Facts Related To CarryMinati

CarryMinati is a YouTube channel run by Ajey Nagar and he is Hinduism from Religion.

CarryMinati YouTube channel has more than 24 million subscribers and billions of views, and his channel receives more than 5 to 7 million views per month.

So, he easily earns around $5000 or 3,90,000 INR, per month using only YouTube monetization plus Sponsered price for sponsoring any product.