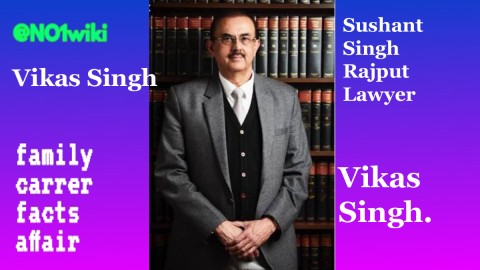 Vikas Singh is a prominent lawyer from Bihar, India.

He become the headline in all news channels when Mr. KK Singh hired him for the case of Sushant Singh’s mystery suicide case.

In short, if you are interested in known about the opposition lawyer of Rhea Chakraborty then stick to this article until the end.

He is 58 years old, famous as a senior lawyer.

He is one of the prominent lawyers in the country and known for fighting many high-profile cases in his career.

Recently, he becomes famous because he is hired by SSR’s father for Sushant Singh’s mysterious suicide case.

The Career of Vikas Singh.

Vikas Singh started his career as a lawyer. He fought lots of high profile cases and won many of them.

He comes into the spotlight because of the case of Sushant Singh Rajput.

After Sushant’s suicide, his father filed an FIR against his ex-girlfriend Rhea Chakraborty, her family, and some others also for being accused of suicide, fraud, and breaching of trust.

Vikas is ready to fight for SSR and now he regularly comes in media for interviews and stated that according to his vision the case is improving.

Recently, in one interview he said that Rhea Chakraborty has shown her double face at every given point in this case.

Some Unknown facts about Vikas Singh.

Vikas Singh is a very high-profile lawyer from Patna, Bihar.

Vikas Singh is the only lawyer who has been associate with the three temple cases is Ayodhya Ram Temple, Guru Ravidas Temple, and Balayogi Shri Sadanand Ashram.

In 2005, he was appointed as Additional Solicitor General by President Dr. APJ Abdul Kalam.

Interestingly, he was also elected as the President of the prestigious Supreme Court Bar Association in 2017.

Vikas is also known for his philanthropic work and has been selflessly contributing to organizations like CRY.