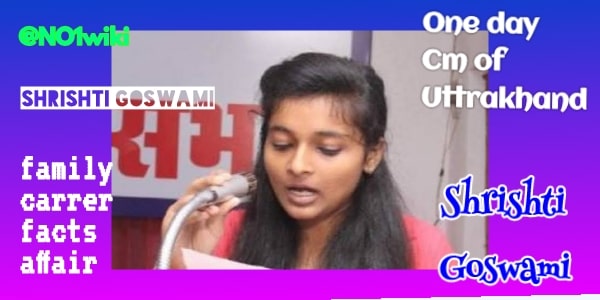 Shrishti Goswami is a one-day chief minister of Uttrakhand.

She became famous because she is the first one-day cm of this state and she won this opportunity.

If you also got the news of this one-day cm girl, then you are in the right place just stick to this article until the end.

Shrishti Goswami was born in Haridwar district, at village Daulat Pur. She was born in 2001 and currently, she is 19 years old.

Shrishti’s father Praveen Goswami a normal shopkeeper who earns a perfect income for his family and Shrishti’s mother is a housewife.

Shrishti is a new studying at B.S.M P.G College, Roorkee. She is doing B.S.C Agriculture at this college, she is a student of 3rd year.

If you have sent a superhit film “Nayak – areal hero” then you will be surprised by knowing Shrishti is going to play the role of Nayak in real life.

Goswami is famous because she is the cm of Uttrakhand state.

She starts her career in politics when she become Bal Vidhan Sabha (children’s assembly) in 2018.

As this assembly conduct election in per 3 years, and now she won and elected as C.M for the second time in this assembly.

To the owner and to respect her the Uttrakhand government, has decided to allow her to be cm of Uttrakhand for one day.

As we knew every year girls’ day is celebrated on 24th Jan and this year it will be special because a girl only of 19 years is going to be a Cm of one state.

A letter in this regard says that Shrishti will review some of the government schemes and plans like the Atal Ayushman Scheme, Smart City project, Homestay Scheme by the tourist department, and many other schemes.

Some unknown facts about Shrishti Goswami

She starts her career in politics at a children’s assembly.

She is one of day cm of Uttrakhand as a gift by the Uttrakhand government.

She won this gift because she won the children’s assembly election two times.