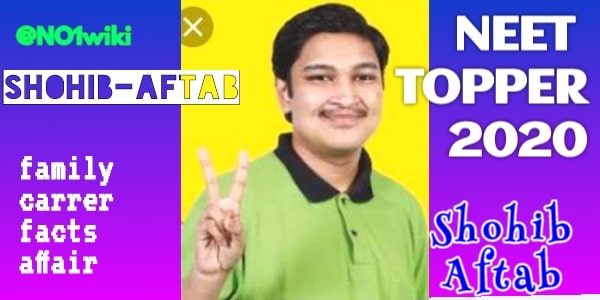 Shoaib Aftab is a NEET Topper with full marks.

Shoaib Aftab is famous because he topped the NEET examination with 720 out of 720 marks.

As we all know that NEET exams have been released the result on the official website named ntaneet.nic.in

This is a time of Corona crisis and this exam is conduct in the midst of that crisis.

So, this exam is very challenging for both management and students. But Shoaib is a student who creates history.

If you are also interested in NEET then read the full bio of this topper student.

Shoib Aftab is an Odisha’s student who topped the NEET exam with 720 out of 720 marks.

He is the first NEET topper from his home state.

He studies at Allen Career Institute in Kota, Rajasthan and his institute announced that he scored 100% result in the exam according to his answer key.

Shoaib was taking coaching in Kota, Rajasthan, and said that when all the students from Kota were returning to their homes due to corona lockdown, he stays there with his mother and sister and prepare for his exam and the result of his passion and hard work is in front of you.

He said that he wants to get admitted to AIIMS, Delhi.

The Career of Shoaib Aftab.

He is a bright student from his childhood.

When the entire country enjoying their lockdown, he prepares for his exam in Kota.

He was living in PG Kota with his mother and younger sister during the lockdown.

He passionately loves the profession of a doctor. So, he keeps biology and maths in 12th and passed his 12th board exam with 95% marks.

In Rourkela, he completes his primary education up to 10th in Desouza’s School, Rourkela, Odisha.

In Kota, he studies at Sarvodaya Paramount School, Kota.

Now, Shoaib is preparing for his further studies in Cardio Medical.

Some Unknown Facts about Shoaib Aftab.

He was born and brought up in Rourkela, Odisha.

After high school, he shifted to Kota for the preparation for the NEET examination.

His father, Sheik Mohammad Abbas, had a tea business, but after the loss in business, he started a construction business.

He becomes the first NEET aspirant from Odisha who secured AIR 1 in this examination.

He received the coaching of NEET from the Allen Career Institute in Kota.

In 2020, he also gave the JEE Mains examination; just to check the preparation in Physics and Chemistry.

His favorite subject is physics.