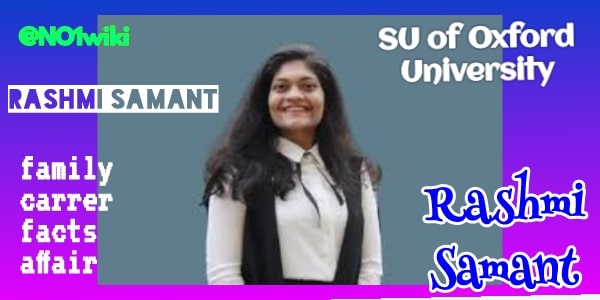 Rashmi Samant is the new president of the Student Union of Oxford University and she is the first Indian woman who won this election.

According to this University, she won 1966 votes out of 3708 votes and this is more than the combined votes of her competitors.

Rashmi is from Manipal town in the Udupi district of Karnataka and she is a graduate in mechanical engineering from Manipal Institute of Technology in 2020.

If she wants to know more about this talented girl then stick with this article until the end.

Samant was born in Manipal town, Karnataka her father is a businessman in Udupi and her mother is a housewife.

She was born in a middle-class family, but she is very talented in the study and7 completes her graduation in mechanical engineering.

She is famous because she made history that Rashmi is the first Indian woman who was elected as a president of the Student Union (SU) of Oxford University and she resigned from the post just days later.

She resigned due to controversy surrounding some of her past remarks and references.

Yes! Rashmi becomes the first woman who won the election of the Student Union (SU) at Oxford University.

But, she resigned from this post just days later due to controversy on her past social media posts.

If you see her old social media posts then you get that they are “racist” and “insensitive”.

In an open letter published in the student newspaper, ‘Cherwell’, Samant said that, “Though the recent developments might make it hard for you to believe the sincerity of my apologies, it deeply pained me to note that I have lost the trust that the student community reposed in me with their votes and belief in my manifesto owing to my mistakes. “Regrettably, I alienated people within our wonderful student community to the extent that they deem me unfit to be the leader they rightfully deserve”.

Now, the election is re-open and Rashmi’s resignation was accepted by the university.

Some unknown facts about Rashmi Samant

Rashmi Samant is the first Indian woman who won the election of the Student Union at Oxford University.

She is graduated from the Manipal Institute of Technology in 2020.

She did a mechanical engineer and one of the talented girls in her college.

She promised that, if she won the election then she increase du ding on the mental health of students.