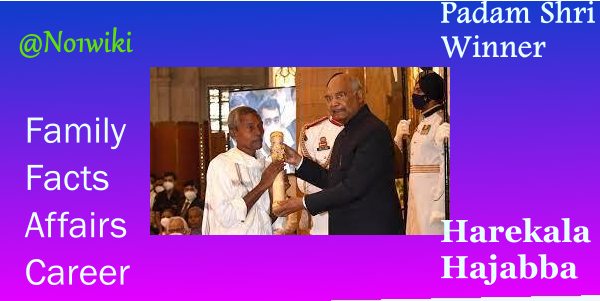 Harekala Hajabba is an Indian social activist and orange vendor living and working in the city of Mangalore, Karnataka, India. He is a very honorable person who got Padam Shri from the Indian government.

If you want to know more about him then you are at the right place. Here in this article, we are going to discuss her early life, personal life, and professional life. So stick to this article and then get to know everything about her life in detail.

He was born on 17 October 1956 and currently as of 2021 he is 65 years old. He was born in Harekala, [Mangalore]Dakshina Kannada, Karnataka, India. He belongs to a normal middle-class Muslim family.

He dropped out of school at an early age to earn money and contribute to family expenses. Many years ago, when a foreign tourist asked him the price of an orange in English, he did not understand what had been saying and felt embarrassed. He had not had the privilege of any kind of formal education.

That day he had decided that he had to open a school in his village for the kids who need a study and finally he started saving money from that day onwards.

He was able to start a small school. Today, the school, which has grown with government support and donations from private individuals, is known as Hajabba School.

Hajabba’s next dream is to build a Pre-University college in his village. He is very sincere about his dream. He is a very silent personality person.

He is affectionately known as ‘Akshara Santa’ (letter-saint). He is known for the extraordinary contribution he made, despite his own relatively constrained circumstances, to the cause of education in his native village.