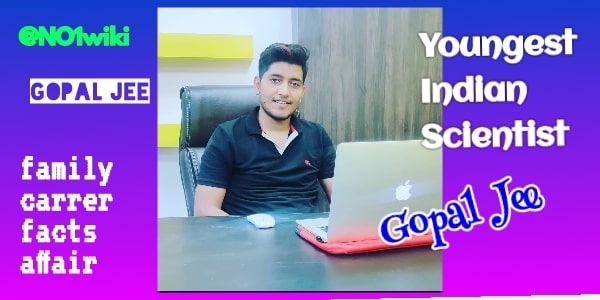 Gopal jee is the youngest scientist. He is one of the best researchers and inventors from India, mainly famous for inventing Bio cell  in 2014, also he was awarded an inspiring award for his wonderful experiment.

If you are also interested to know more about this 21 years scientist then you are at the right place. In this article you will get full and complete details of him.

He was born on 24 april, 2000 in Naugachia, Bhagalpur, Bihar, India. His father name is Prem Ranjan Kumar and his mother name is Usha Devi.

He belongs to a very poor agricultural family. He didn’t get primary education but he got home tutored by a teacher from his village Chandan Kumar Thakur. Later on for higher education he took admission in government model high school, Tulsipur. He completed his schooling in 2017.

Gopal competed at a national programme implemented by the Department of Science and Technology, “Innovation in Science Pursuit for Inspired Research (INSPIRE) and also pursued his bachelor degree in B.tech Computer Science from there.

When Gopal was in class 9 he and his sister had difficulty studying at night. One day his school uniform got stained from banana juice. The staine isn’t removed.

He asked his teacher, then he explained to him that it happened because of the banana’s acidic nature. He thought if we join two electrodes to the banana stem what will happen. He did it practically and got an awesome result.

The banana stem produced 3 volts of electricity and it was enough to light one LED bulb. His teacher appreciated him and sent his invention to district as well as state level where he won prizes. And his invention got selected for a national programme implemented by the Department of Science and Technology.

After very hard work and struggling in June 2017 he met Chief Minister of Bihar Shri Nitish Kumar and showed a video on how his works to the chief minister and chief secretary Anjani Kumar Singh.

By the age of 17, He had done 10 inventions, 2 of which were patented. Some of his inventions, such as the Banana bio cell, have been published around the world.

Some interesting facts about Gopal jee