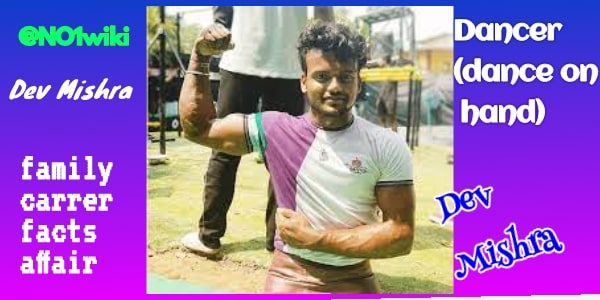 Dev Mishra is a person who perform all types of dance with his hands! Yes you heard that right. His hands.

Dev is famous dancer who dance in rality shows and won lots of medals and appreciation from his dance which he done only with the help of hands.

If you also want to know the story of a dancer without legs then you are in the right place just stick with this article untill the end.

Dev Mishra was born on Bihar in a very poor or low income family, his father die due to shortage of money in prolonged illness, when he is 6 months old.

Due to his family background dev not able to study after 8th standard and he drop out of school and start odd jobs to support his family.

This become his daily routine but one day an accident change his life and make him a star dancer and well known face of social media with huge appreciation.

The Accident which change the life.

Dev Mishra start working in different sector and one fine day he is travelling to Hyderabad as a welder for some contract.

As he entered in the Barauni Station, due to very huge crowd he felt a strong push and he fell on the track.

That accident took hardly a few seconds and the train that he thought would take him to his destination, ran over him and take his legs above his knees.

Dev was just 19-years old, when this happen to him.

The worst part is when he was crying in pain then another train ran over him and he bleeding heavily and lied on the tracks writhing in pain.

When he admit in a hospital it was aready six hours past the accident and doctor’s believed that he could not be saved, but proper medical treatment and a month of recovery rest later, Dev able to go back his home.

On returning home his mother was the only who took care of him and looked after him and helped him.

Dev said that “The pain of losing my feet wasn’t killed me, but the fact that my own brother had started looking down upon me. It was then when I realize that until I was physically fit man who could constribute to the family, he respect me. When I become bedridden, he started considering me useless”.

This situation of home broke me completely. But he decided to move past this, and he think this is the actual time to do something big in life.

This is the time when Dev Mishra visited city of dreams, Mumbai and he start visiting several celebrities houses very often in order to find good work but he didn’t get any.

One of the actor was generous and hand him Rs. 5000 and a month later he me a renowned jewelry designer.

About that jewelry designer Dev said that “She is like a God to Me. The day I met her I tell her that I want some job to survice in the city. She immediately got in touch with some of her workers and bought me a tricycle and Rs. 10,000 for food.”

She give hime a job and also give him a prosthetic legs worth Rs. 5 lac and she had promised to help him in every situation.

How he become star dancer.

When he work with that Jewelry Designer, dev mishra found to a dance instructer.

He motivate Dev and he belive that Dev must have to learn dancing and become an inspiration for rest of the world.

When he learn good amount of dance then he start auditioned at various stage shows side by side, he studying for class 12 as well.

In the dance show of India’s Got Talent judges select him in his first atempt and he also dance for some other dance shows.

Some Unknown facts about Dev Mishra

Dev Mishra is a dancer who become famous when perform a dance only on his hand in India’s Got Tallent.

In one interview he tell everybody that he met a jewellery designer who change his life and that designer is – Farah Khan Ali.

Dev Mishra is very passionate about dancing and able to dance in almost all types of moves and formates only through his hands.