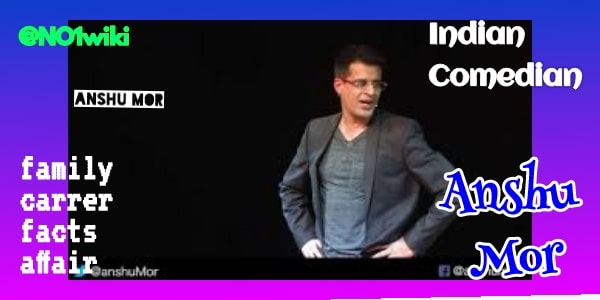 Anshu Mor is an Indian comedian, writer, podcaster and famous for his live comedy performance in different places.

If you love standup comedy then you must watch his shows, his storytelling style comedy not only makes him funny but also make him the best in all.

Anshu was born in 1976 in Delhi in a middle-class family in India. His family wants to see him in a high-class corporate job as an engineer and he completed his engineering from a good college and get his B.tech degree also able to get the job in Microsoft and this change his lifestyle.

After many years when he thinks he is now well prepared to choose his passion as his career then he starts to work as a comedian and now he is very famous due to his comedy.

The career of Anshu Mor

Anshu starts his career as a head of Xbox marketing in Microsoft and this job he gets during his placements.

When he started his career he works for Microsoft for straight 11 years and after that when he thinks that he can shift his career and now the time has come when he can follow his passion.

Then his dream is writing and comedy which he quit years ago due to engineering and he start that passion and from 2016 he started his career as a comedian.

When his first comedy video goes viral then his new comes in India times in which Anshu Mor consider a rising star of comedy in India.

Now he appeared in 475 videos total in Indian and aboard and this makes his name in big comedians.

Anshu is now working as a podcaster also in which he appeared and record podcasts and those features on big platforms.

He is working to make his podcast and writing company and busy intake his comedy career to the next level.

Some unknown facts about Anshu Mor

He starts his career as an engineer at Microsoft.

After working 11 years in Microsoft, he quit his job in 2016 and start his career in comedy.

Anshu Mor also works as a podcaster and writer.