NO.1 WIKI World’s NO. 1 Wiki Platform Now, nothing will be secret.
Home BOLLYWOOD Tara Sutaria – Get Full Bio of New Hot Bollywood Actress @No.1... 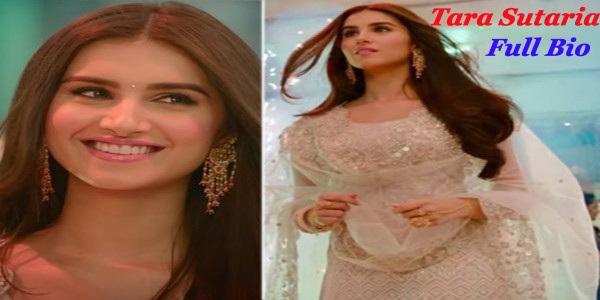 Tara Sutaria is an Indian actress – Full Bio is given below.

She became famous for her role in the teen drama film “Student of The Year 2” and soon after that she plays the role of a mute girl in the action film “Marjaavaan”.

If you are a fan of such a hot actress then, you must have to read this article till the end and get some information about her Bio, Age, Figure, Career, and some unknown interesting facts.

Tara Sutaria was born on 19th November 1995 in Zoroastrian Parsi family. She has a twin sister named Pia Sutaria.

Both twin sisters trained in classical ballet dance, modern dance, and Latin American dance at the school of Ballet and Western Dance named Royal Academy of Dance in the United Kingdom.

Both sisters are belongs to the Imperial Society for Teachers of Dancing, United Kingdom.

She has been a professional singer since she was 7 years old.

Tara get her bachelor’s degree in Mass Media from St. Andrew’s College of Arts, Science and Commerce.

Tara Sutaria started her career with Disney Channel as a video jokey and continues to be an associate with them, with two successful sitcoms to her credit.

She has also record music in India and abroad for films, advertisements, and also her own original work.

Her song “Slippin Through My Fingers” is the part of Ashiwin Gidwani Production of Bharat Dhabhaolkar’s Blam It On Yashraj.

But, Tara Sutaria played the lead role of Sandy in Raell Padamsee’s production of the Musical Grease.

She also recorded and perform lots of solo concerts in London, Tokyo, Lavasa and Mumbai.

She performed music with some Famous Japanise Singers – Louiz Banks and Mikey McCleary.

Tara Sutaria was one of the top finalists of 2008 “Pogo Amazing Kids Awards” in the singer category.

She received recognition for her roles of ‘Vinnie’ in “The Suit Life of Karan & Kabir” and role of ‘Jassie’ in “Oye Jassie”.

But, Tara Sutaria was first seen on television, in 2011 when she was 13 years old, in the reality show named “Entertainment Ke Liye Kuch Bhi Karega”

Where she performed an opera and recive a standing ovation and she won Rs. 10,000 from that show.

After completing her graduation she get her debut fim with Karan Johar’s “Student of the Year 2” (2019).

Some Unknown Facts of Tara Sutaria

Aarav Kumar – Full No.1 Info Related to Son of Akshay...