NO.1 WIKI World’s NO. 1 Wiki Platform Now, nothing will be secret.
Home BOLLYWOOD Rhea Chakraborty – Get Bio & Something No.1 on Girlfriend of S.S.R... 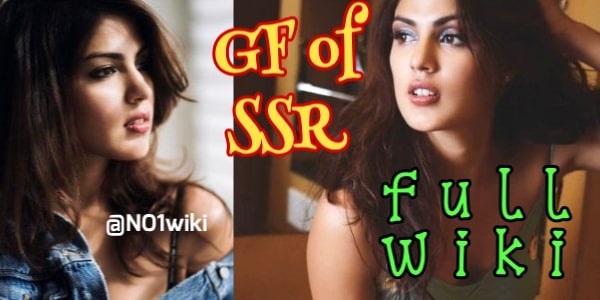 I must sure that if you are a fan of Indian Bollywood Town, then you must hear the news that famous Bollywood Actor Shusanth Singh Rajput is a deed.

But, there is an actress who became so famous due to this news in Indian News Channels and the name of that heroin is – Rhea Chakraborty.

Here, we going to give you some details regarding this Indian actress and VJ, who start her career as a VJ on MTV India.

She became famous due to her relationship news with Sushant Singh Rajput.

If you think this may intrests you then read this article untill the end.

Rhea Chakraborty, was born on 1 July 1992, into Bengali family in Bangalore, Karnataka, India.

Her father was an Indian Army Officer. She born and brought up in Ambala and complete her schooling from the Army Public School of Ambala Cantt.

she starts her television journey as a VJ on MTV India and later on she got a film in which she played a lead role and make her acting debut with the film “Mere Dad Ki Maruti”.

The career of Rhea Chakraborty

Rhea started her television career in 2009 with a show named – “TVS Scooty Teen Diva” where she was the first runner-up.

Later on, she gets a chance to work as a VJ with MTV India at Delhi. She has hosted several MTV shows like – Pepsi MYV Wassup, Tic Tac College Beat and MTV Gone in 60 Seconds.

In 2012 she act a role in her first-ever film in the Telugu language named, Tuneega Tuneega, where she played the character Nidhi.

In 2013 she debut in Bollywood with the film – “Mere Dad Ki Maruti” as Jasleen.

In 2014 she played the character of Sonali in Sonali Cable.

In 2017, she appeared in YRF’s Bank Chor movie. She also did a special appearance in “Half Girlfriend” and “Dobaara: See Your Evil”.

Now, she came in news regularly because she is the girlfriend of Sushant Singh Rajput and the death of Sushant was a mystery right now.

Some Unknown Facts of Rhea Chakraborty.

Rhea Chakraborty is an Indian film actress and a video jockey.

She became famous in news channel in these days because she was a girlfriend of Late Sushant Singh Rajput.

Rhea Chakraborty come under eyes of police in case of Sushant Singh Rajput murder or sucide.

She born in Hindu Bengali Family.

She start her career as a host in various TV shows on MTV.

She has featured in different TV commercials like – Yepme, Stayfree, and Maruti Suzuki.

Ginni Chatrath – Get Full Bio on Wife of Kapil Sharma...