NO.1 WIKI World’s NO. 1 Wiki Platform Now, nothing will be secret.
Home BOLLYWOOD Mahesh Bhatt – Full Bio of Famous Director with No.1 Facts on... 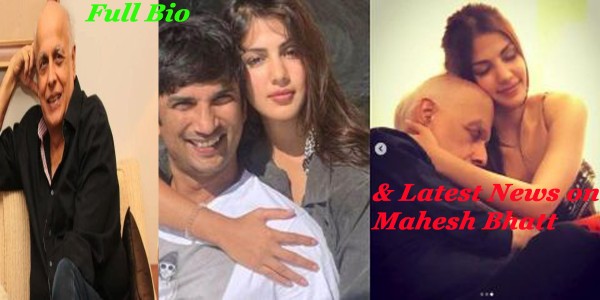 Mahesh Bhatt is an Indian film director, producer, and screenwriter known for his work mainly in Hindi cinema.

He get his more popularities due to his out-standing works in 90s cinema.

The first film which directed by Mahesh Bhatt is Saaransh (1984), this film was screened at the 14th Moscow International Film Festival.

His first film became India’s official entry for the Academy Award for Best Foreign Language Film for that year.

The 1986 film “Naam” was his first film in commercial cinema.

In 1987, he turned into a producer from a director with the film “Kabzaa” under the banner of “Vishesh Films”, with his brother Mukesh Bhatt.

Mahesh Bhatt was became one of the most recognized director of the Indian Bollywood Film Industry.

Here, we give you some interesting information regarding one of finest director of Indian Cinema – Mahesh Bhatt.

If you are interested in details and latest news regarding Mahesh Bhatt, then stick to this article untill the end.

He is Director, Producer, Screenwritter in Indian Bollywood Cinema.

Mahesh Bhatt was born to Nanabhai Bhatt and Shirin Mohammad Ali. Bhatt’s father was a Hindu Nagar Brahmin and mother was Gujarati Muslim.

He has one sibling named Mukesh Bhatt. Mukesh is also an Indian film producer and partner in film producing company named “Vishesh Films” with his brother Mahesh Bhatt.

The career of Mahesh Bhatt

Mahesh start his career at the age of 26, Bhatt made his debut as a director with the film “Manzilen Aur Bhi Hain” in 1974.

Mahesh Bhatt had one of his biggest release with musical romance film Aashiqui (1990), in colaboration with T-series.

Some of his top films in his directorial journey and some famous awards which won by Mahesh Bhatt is given below.

At the age of 26, he start her career in film industry as an assistant director and work in film “Manzilein Aur Bhi Hai” in 1974.

He directed the film “Lahu Ke Do Rang”, starring Shabana Azmi and Vinod Khanna in the lead role and this film won two Filmfare Awards in 1980.

His first most famous film was “Aashiqui” in 1990 and this movie became the most successful movie under the direction of Mahesh Bhatt and made him one of the successful names in Bollywood.

Pooja Bhatt, his daughter was launches by him in 1991 as a lead actress opposite to Aamir Khan in “Dil Hai Ki Manta Nahin”.

From 1990 to 1999, he directed some best and most popular films of Bollywood cinema and give many TV series and films to proud.

In 1999, he directed his last Movie “Kartoos” and thereafter he took up screenwriting and screenplays for over twenty films and many of them were became a box-office success.

Awards and Nominations of Mahesh Bhatt.

According to one article, Bhatt had called Sushant a schizophrenic and said, “It is Parveen Babi all over again”.

It is another news that Rhea Chakraborty had left Sushant on the advice of Mahesh Bhatt.

Some Unknown Facts About Mahesh Bhatt

Mahesh Bhatt inherited the legacy of his father of being Director, his Father Nanabhai Bhatt was also in the same profession. Nanabhai’s career lasted 40 years from 1942 until 1982.

Saaransh was the first film which was directed by Bhatt, and this film was India’s official submission for the Oscar for Best Foreign Language Film in 1985.

The name of his film production company is named after Mukesh’s son Vishesh, right now, Vishesh is also a film Producer.

Bhatt counts on the Congress party is committed to secularism. In the 2014 Lok Sabha elections, he campaigned in Karvan-e-Bedari (caravan of awareness) and asking people to vote for Congress and defeat BJP’s Prime Ministerial candidate Narendra Modi.

Anand Ahuja – Get Full Bio of Fashion Couple at No.1 Wiki.