NO.1 WIKI World’s NO. 1 Wiki Platform Now, nothing will be secret.
Home BOLLYWOOD Ginni Chatrath – Get Full Bio on Wife of Kapil Sharma on... 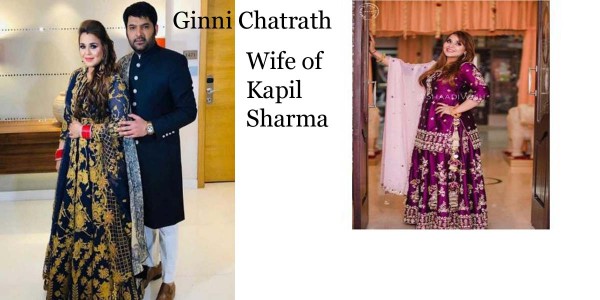 Who is the wife of Kapil Sharma?

If you are interested in known about the Age, Lovestory, and Biography of Kapil’s wife then try to stick through this article.

From her childhood, she wants to be an actress in the Bollywood city.

She also took part in some reality shows. She suddenly became famous on Indian television when Kapil Sharma revealed about the relationship with her on Social Media.

She belongs to the middle-class Sikh family. Her father runs a business in Jalandhar, and her mother is a homemaker. She also has a younger sister named Harleen Chatrath.

Ginni Chatrath is in a relationship with Kapil Sharma for many years and both got engaged in 2013.

They first saw each other on the set of the comedy reality show “Hans Baliye”.

Ginni Chatrath tied in a knot of marriage with Kapil Sharma on 12th December in Jalandhar, Punjab. Together, they have a daughter, who was born in December 2019.

She did her schooling at MGN Public School, Jalandhar and did her graduation at Guru Nanak Dev University College at Jalandhar.

She also did a Masters in Business Administration (MBA) in Finance from the DAV Institute of Engineering and Technology, Jalandhar.

In 2009, she took a part in one comedy reality show named “Hans Baliye”. After that show, she also got several offers from Punjabi cinemas, but she did not accept any because she wants to stay away from the Limelight.

Currently, she helps her father in her business and she is famous for being a wife of India’s most popular comedian and actor Kapil Sharma.

Some Unknown Facts of Ginni Chatrath

Ginni neither drink and nor smoke.

She got lots of Punjabi Film offer but she rejected because she is not interested in films.

Ginni hails from an upper-class business family of Punjab.

Ginni and Kapil Sharma first met with each other during the reality show named “Hans Baliye”.

It is believed that both Ginni and Kapil fell in love with each other on the set of that show and started dating each other secretly.

She is 9 years younger than Kapil.

She was obese in her teenage, and she transformed her body into fit one after selected for “Hans Baliye”.

On 17th March 2017, Kapil revealed about his relationship with her on Twitter, by posting a photo of both.

Now, Ginni Chatrath assists her father for his business in Jalandhar.

She is a firm believer of Baba Murad Shah Ji of Nakodar city, Punjab.