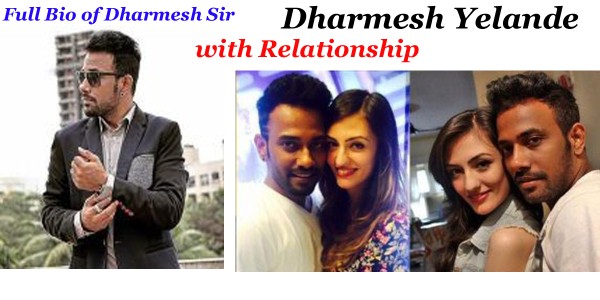 Due to his best performance in those dance he was hired by Farah Khan to choreograph the movie Tees Maar Khan.

He also worked in the dance based film “ABCD – Anybody Can Dance” and “ABCD 2” and he also featured in “Street Dancer 3D”.

He was a mentor for the dance reality show “Dance Plus” and give tranning to those participants.

If anybody is interested in Dance and wants to known full bio, career, with some unknown facts about Dharmesh Yelande.

You are on right place just stick to this article and read whole information.

Dharmesh was born on Monday, 31st October 1983 in the Vadodara City of Gujarat.

He did his schooling from Baroda High School, Vadodara.

He took his dance training under Krishna Rao.

He got his fame from his first dance show appearance in Dance India Dance.

The career of Dharmesh Yelande

Dharmesh career start from 2007, Dharmesh Yelande participate in DD National’s “Airtel Krazzy Kiya Re” and he was first runner up in that show.

After that in 2008, he participate in Sony TV show “Boogi Woogi Mahayudh” and he was the winner of that show.

He appear in lots of reality show again and again, then once he apperared in the show which change his life and that show is DID.

After his first class appearance in “Dance India Dance (DID)”.

In 2011 he participate in the show, “Dance Ke Liye Kuch Bbhi Karega” and became the winner of the show.

In 2013, he became the jusge of the colour Marathi show “MAD – Mhanje Assal Dancer”.

In 2015, he has been the captain of the dance reality show “Dance Plus” on Star Plus.

In 2020 he also again appeared in one TV show named, “Khatron Ke Khiladi 10” on Colors TV.

He also appeared in film which based on dance. His first film debut was ABCD and after that he appeared in the sequle of that film named “ABCD 2”.

Some Unknown Facts of Dharmesh Yelande

He considers Remo D’ Souza as one of the biggest inspiration for his dance career.

Since his childhood, he was very passionate about dancing, Prabhu Deva and his mentor was his first inspiration.

Dharmesh start dancing by copying Govinda from his movies, and after that he start learning Break-dance and Bharatanatyam.

He also acted in Bhojpuri films.

In 2020, he constested the reality TV show “Khatron Ke Khiladi 10” on Colors TV.

He is popularly known as Dharmesh sir, and sometimes, even his mother calls him “Dharmesh sir”.

Dharmesh is a very big dog lover and has a pet dog named “Coffee”.

According to Dharmesh, if not an actor and dancer, he would have been a cricketer.

Dharmesh Yelande worked as a peon in his struggling days. He later left that job and started to run Sev Usal Laari Stall, right next to his father’s tea stall. He did this in an effort to have more time for dancing.

In this beginning of his career, Dharmesh Yelande used to be a background dancer for the Gujarati superstar like Hitu Kanodia, Naresh Kanodia, and Vikram Thakor.