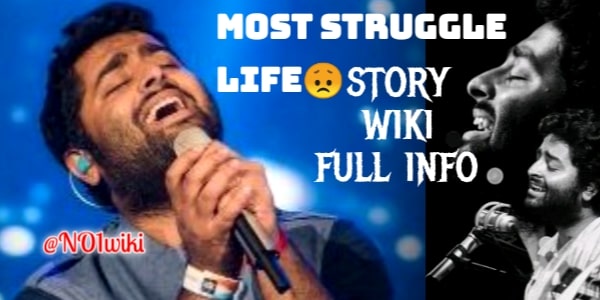 Here, we going to talk about one of the most popular and favourite Hindi song singer and his name is Arijit Singh.

Arijit Singh is a Hindi and Bengali singer but has also performed in various other Indian languages.

He is the recipient of a National Award and seven Filmfare Awards.

If you are a fan of Arijit Singh and interested to known.

Age, Wife, Children, Biography, Career and many more than stick to this article until the end.

Arijit Singh was born on 25th April 1987, in Jiaganj, Murshidabad, West Bengal to Kakkar Singh, a Lahori Sikh father and a Bengali mother.

He is an Indian playback singer.

He began his music training at a very young age at Home. His maternal aunt trained in Indian classical music, and his maternal grandmother used to sing.

So, from his home, he starts his music class and with that continues practise start participating in many singing competition and successfully won them.

He starts his career when he participates in the contemporary reality show, “Fame Gurukul” in 2005.

In that show, he was discovered by filmmaker Sanjay Leela Bhansali and Kumar Taurani.

In the starting of his career, he nominates for Upcoming Male Vocalist of the Year and won Mirchi Music Award in 2013.

Arijit Singh was declared the most-streamed Indian artist of the year 2019 by Spotify.

The career of Arijit Singh

Arijit Singh musical career began when his guru Rajendra Prasad Hazari, felt that “Indian classical music was a dying tradition”, then he insisted Arijit leave his hometown and participate in the reality show.

After that Arijit participate in the show, “Fame Gurukul” (2005).

During that show, filmmaker “Sanjay Leela Bhansali” recognized his talent and give him an offer to sing a song “Yun Shabnami” a song of film “Saawariya”.

But, during production, the script changed and the song was no longer required. So, that song was not released.

After that, he participates in another reality show name”10 Ke 10 Le Gaye Dil”.

From that show, Arijit Singh got a chance to sing pieces for advertisements, news channels and radio stations.

Arijit spent a part of his early musical career as a music programmer and music producer.

While working with other producers and composers he supervised the vocals and got a chance to sing for different songs.

At his early releases when he got a chance to sing a song for “Aashiqui 2”.

In 2010, Singh started working with Pritam on three films named – Golmaal 3, Crook and Action Replayy and after that, he also gets a chance to sing a song for Bengali as well as Telugu Film Industry.

Now, Arijit Singh is very famous and one of the most favourite singer in the Bollywood Film Industry.

Arijit comes from a musical background family as his grandmother, mother and sister are also a very fine singer.

He started his singing career with one music reality show name – “Fame Gurukul” in 2005.

He participate in many singing competitions, his first reality show competition which he won was “10 Ke 10 Le Gaye Dil”

Before becoming a playback singer, he freelanced with musicians like – Pritam Chakraborty, Vishal-Shekhar and Mithoon Sharma.

His favourite song is “Phir Le Aaya Dil” from the film “Barfi”.

He also said that he become claustrophobic while listening to his own songs.